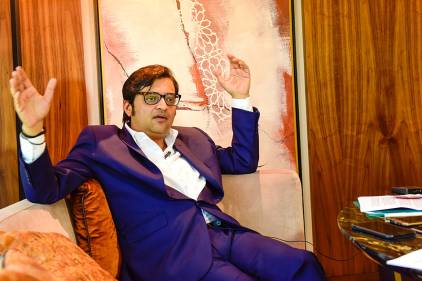 Arnab Goswami’s father, Colonel Manoranjan Goswami, served in the Indian army for nearly 30 years. After his retirement, he joined the Bharatiya Janata Party. He lost the 1998 Lok Sabha Polls for the Guwahati constituency to Congress candidate Bhubaneshwar Kalita. His maternal grandfather, Gaurisankar Bhattacharyya, was an elected legislator from the Communist Party of India and served as the leader of the opposition in Assam for many years. Goswami’s maternal uncle, Siddhartha Bhattacharya is the incumbent BJP MLA from Gauhati East constituency; he was the head of the Assam unit of the party before Sarbananda Sonowal took over in 2015.

Republic TV, Arnab Goswami’s current news channel was funded in part by Asianet. Asia net was primarily funded by Rajeev Chandrasekhar, a then-independent member of Rajya Sabha who had intricate links with the Bharatiya Janata Party. He was the vice-chairman of the National Democratic Alliance in Kerala. From left he leaned to right in no time and since then he is going strong.

So strong are his ties with the right wing government that even his wiki page last edited by an editor who is Master editor lll and is entitled to display the bufonite editor star is also safe guarding the PM Modi’s wiki page, the Swarajya right wing monthly print magazine page and news portal wiki page, and is also responsible to get the wiki page of Bhairon Singh Shekhawat the Ex Vice President silver locked from further edits as their were many editors who wanted to make changes to the glorified page. Guarding page of Arjun Singh who was the Chief Minister of Madhya Pradesh when the deadly gas leak from the Union Carbide factory occurred,Harrasing Gurmehar kaur with edits to her age,and don’t get surprised if the Karimganj Junction railway station of Karimganj in Assam name is changed in near future as the editor is trying hard to dig the history to get the approval to make changes to the name.

He claims to be a journalist but he is not his decline towards right wing ideology is clearly visible so how can the viewers expect to get the news? What all the viewers get is the biased opinion on a matter which could be of National interest or the high decibel show which is to cover up the real news.

During BJP govt. a case against him was not investigated as it should have been. He has the guts to do a story on the suicide or murder of loved actor Sushant Singh Rajput. Where as a case against him was swept under the carpet despite the suicide note purportedly written by Anvay Naik, managing director of Concorde Designs Private Limited. He said he was forced to take his life as he was not paid dues of Rs 5.40 crore by the three accused – Arnab Goswami being one of them. The amount is huge to break or make a contractor and Arnab and his associates broke him to a level which made him take this drastic step. Following the suicide of his son his mother also took her life. It is his daughter Adnya Naik who is fighting the battle for justice after the case was handed over to C.I.D by the current Uddhav Thackeray govt.

The hate within him is consuming him at a pace which is unimaginable. His hate for other news channel for whom he had worked 10 years for is just because they are not ready to fall in line with his ideological masters. Even the name of that channel on his any debate is enough for him to loose his civility.

His channel is ranting space for right wing supporters where there is no space of words for the opposition to keep their views. He under the influence of power loves doing media trials. He lacks humanity he vultures over the dead bodies to gain TRPs, Actress Rhea being the latest victim of harassment by his channel and reporters so much so that the food delivery guy the watchmen of his building are getting tortured day and night.

Parliamentarian Shashi Tharoor experienced the worst soon after the death of his beloved wife Sunanda pushkar where he was accused of being her killer to make a perception in the public, hence he filed a civil defamation case in the Delhi High Court against Goswami and Republic TV in connection with the channel’s broadcast of news items from 8 to 13 May claiming his link in his wife Sunanda Pushkar’s death in 2014. Seeking the channel’s response, Justice Manmohan of the High Court said, “Bring down the rhetoric. You can put out your story, you can put out the facts. You cannot call him names. That is uncalled for.”Rhea is also facing the same vulture journalism wish she is strong enough to fight against the players who know the way around the law.