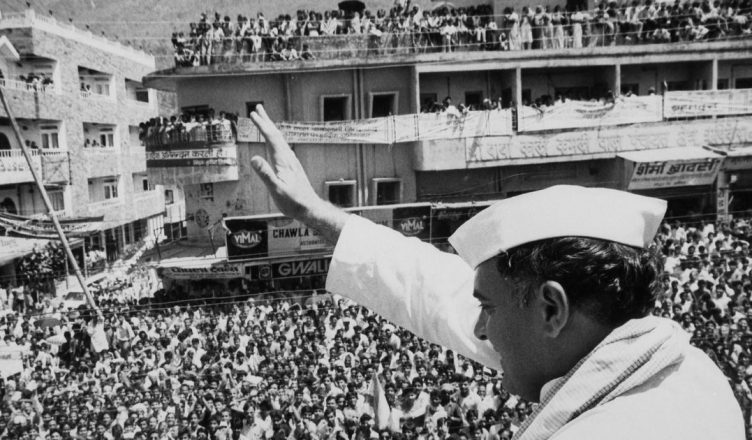 At 40, Rajiv Gandhi became the youngest Prime Minister of India. He was brimming with energy, charismatic and a visionary. Like any average youth, he was aspirational. He aimed to take India into the 21st century. He believed in a fresh thought and new energies to lead India. He once famously said “India is an old country but a young nation.. I am young and I too have a dream, I dream of India, strong, independent, self-reliant and in the front rank of the nations of the world, in the service of mankind.”

He had an absolute mandate and a strong political will. Along with his scientific advisory council, he planned these interventions to be missions. All these components had SMART goals – Simple, Measurable, Achievable, Realistic and Timely. Through technology missions, Rajiv Gandhi DID a LOT.

Drinking Water: To provide clean and potable water to 100000 villages. Technology was used to map where wells can be dug, and labs were established to test the quality of the water. Capacity building initiatives were undertaken to equip people the technological knowhow of repairing broken drinking water pipes.

Immunization: Of millions of pregnant women and children. The national technology mission helped in achieving self sufficiency of vaccine production by modernization and upgradation of vaccine facilities. The results were so quick that India became self sufficient in the production of almost all vaccines by 1990-91.

Sam Pitroda, in a recent interaction with Indian Diaspora said “We set up a vaccine blending system to produce polio vaccine as a part of an immunization mission and we are now the largest producer of polio vaccines in the world and we have completely eradicated polio in 2013!”

Dairy Production: Increase dairy production; improve livelihoods of Lakhs of people by creating employment and enhancing incomes. Technologies to improve breeding, animal health, and fodder and milk production were implemented.  Functioning on the ground prepared by operation flood, milk production recorded the highest ever decadal growth of 70% during the decade 1980-81 to 1990-91. Today, we are the largest producers of milk in the world.

Literacy: Teach people of ages 18-35 to read and write. With an aim of making 80 million youth literate within the next 8 years, the National Literacy Mission was launched. Total Literacy Campaigns were run in the different districts of the country.  Literacy rate of India which was just 43% in 1981 rose to 52% in 1991 and to 65% by 2001. This period saw implementation of the literacy mission and education policy of 1986.

Oil Seeds: Increase oilseed production and reduce, eliminate, or reverse India’s annual import bill for edible oils. This was necessitated by the fact that our export bill for edible oil was second only to petroleum products. With four micro missions, for crop production technology, for post-harvest technology, for input and service support and for price support, storage, processing and marketing, the mission led to the development of 40 new varieties of different oil seed crops with huge yield potential. Production of breeder seeds grew by almost 200% within a short span of three-four years. The findings of the implementation of the mission led to a path breaking policy- the Integrated Policy on Oil seeds.

Telecommunications: Improve service, dependability, and accessibility of telecommunications across the country, including rural areas. Emphasis was on Indian talent, indigenous technology, local production, local capabilities and human resource. With the establishment of the Center for Development of Telematics (C-DOT) and MTNL, telecommunications infrastructure has been developed and the network has reached rural areas. In 1980, India had just 2 million telephones for a population of 650-700 million and there were almost nil software exports but today there are 1.2 Billion phones and our software exports are to the tune of 200 Billion dollars!

Often, results of interventions take years and decades sometimes for results to show up. But with an iron will, highly talented team, the courage to take bold decisions and the burning desire to witness quick results, Rajiv Gandhi’s national technology mission has delivered positive results in a short period of time and laid foundations to revolutionary changes in the target areas, the fruits of which we are enjoying today.