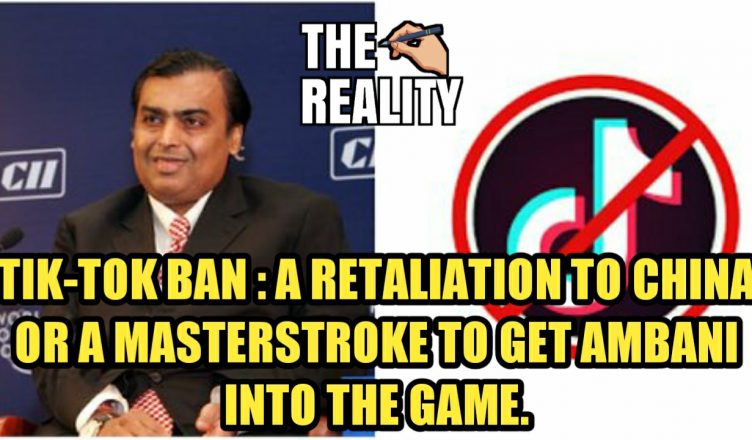 Amid boycott-china campaign, the Indian government had banned 59 Chinese apps. It included tik-tok also. Having Chinese apps in the mobile was being called as an anti-national act by netizens and so-called Deshbhakts. Meanwhile, the news-making noise is that Mukesh Ambani’s Reliance Industries Ltd. (RIL) is going to invest in tik-tok.

China killed 20 Indian troops. In response to that, the Indian government banned Chinese apps. They urged everyone to boycott Chinese goods and products. Even the people who were using Chinese goods/products were subjected to question their patriotism. But now when Mukesh Ambani’s RIL is going to invest in tik-tok, having Chinese apps in mobile is no more an anti-national act. But why are the fake patriots of social media silent on this matter? Or this matter doesn’t count as an anti-national act? Is Ambani allowed to commit treason? Many such questions are being raised.

In our country, Ambani is the one who runs the government. The government is already planning to sell government projects and companies to Ambani. Now, if Ambani invests in Tik-Tok, the government itself will tell people the benefits of Tik-Tok app. The government will convince everyone that having Chinese apps on mobile is in the interest of the country. And fake patriots on social media will spread the word.