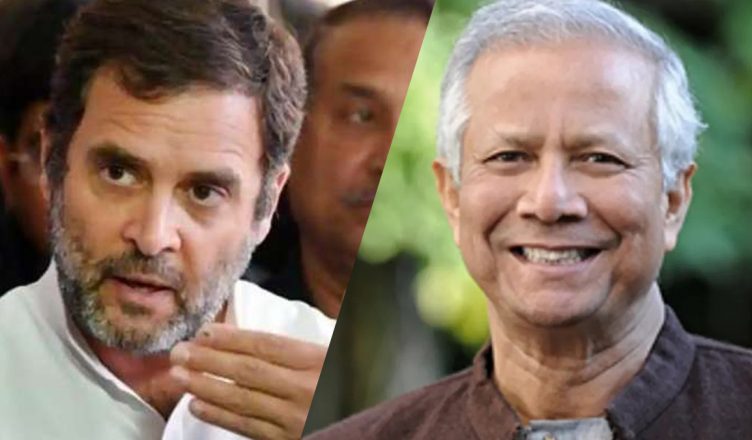 As a responsible opposition leader, continuing his insightful discussions with renowned personalities across sectors, Rahul Gandhi interacted with Nobel Laureate, Prof Muhammad Yunus who championed the cause of alleviating rural poverty through microfinance. One is a leader of the party that has historically had a legacy of encouraging village industries and empowered local governments in letter and spirit while the other strongly believes that every individual has the ingredients and the know-how to fight for their lives and how to make things happen. The core principle of the renowned Grameen bank is that ‘loans are better than charity to interrupt poverty: they offer people the opportunity to take initiatives in business or agriculture, which provide earnings and enable them to pay off the debt.”

The discussion was in the backdrop of the pandemic ravaging economies world over causing widespread unemployment, destruction of livelihoods, distress migration and so on. India witnessed millions walking hundreds of miles barefoot, starving and with their lives suddenly pushed into darkness. One thing is clear that the type of economy that India has borrowed from the west has not produced expected outcomes. There is a need for a big idea to revive the Indian economy and in a sustained manner.

The interaction has offered some feasible solutions based on an alternative model of development in the context of a developing country to bring our economy back on track. Mahatma Gandhi Ji said India is in her villages and this holds true even today with about 70% of the population living in rural areas. 90% of India’s workforce is in the informal sector which implies that they don’t get minimum wages or social protection. Today’s discussion provides some suggestions to revive our economy, leveraging on the strengths of the informal sector and the rural economy. While challenging the urban led growth model, a fresh model banking on microfinance lending to the micro-entrepreneurs and equipping them with technology has been proposed. Muhammad Yunus, who has championed the financial empowerment model, has offered valuable insights from his successful experience.

With the series of events that have unfolded after the onset of COVID-19, Rahul Gandhi made some pertinent observations about serious drawbacks and contradictions of the current economic model, right from its conceptualization to the implementation and points at the wisdom of Mahatma Gandhi Ji who has stressed upon the importance of a strong rural economy. Gandhi Ji stressed on rural development through small scale industries & the principle of trusteeship. He was against a top-down approach where the central government determines priorities and makes policies at the top level. He advocated for a decentralized development model where people at the village level plan and execute development agenda.

Muhammad Yunus observed the reason for mass migration in India was that the people have no money, no life nothing in the cities to stay back. He feels that economics does not recognize the informal sector. According to him, people of India and Bangladesh have a vibrant capacity and tremendous tenacity to do things and make things happen and the only thing that the government can do is provide finance, believe in them and support them. Mahatma Gandhi Ji gave a message for a self-sustained village and retaining village manpower in villages by setting up cottage industries which are labour intensive as opposed to heavy industries which are capital intensive.

Rahul Gandhi said huge SHG institutions in Uttar Pradesh were built where millions of women have been empowered and pulled out of poverty when the government decided to destroy it. The political reality is to be kept in mind while designing and creating institutions which empower people. Prof Yunus says that there will be institutions as powerful as the government which try to destroy newer institutions but when people enjoy what they are doing and people have that will to make these institutions work, no power can destroy them. He said good ideas are indestructible. If one state tries to suppress a good idea, the idea will be implemented in another state with a much greater force.

According to Rahul Gandhi, every crisis gives an opportunity to think and start something new. Post world wars, the world have seen a new thinking emerging and new institutions being created. Post Corona, India has an advantage in terms of huge scope of creating infrastructure and large number of youth to contribute to infrastructure creation. Today’s youth of India feel that something is not right; the astronomical difference between the rich and the poor is not right and they are looking for new ideas to work in that direction and as an opposition and the Congress party is trying to offer an alternative vision.

The discussion has put forward a discourse of an alternative development model which is based on rural development. There is no reason why this suggestion cannot be taken up as it is based on a successful model recognized by the world across and was once advocated by none other than our Mahatma. Gandhi Ji used to say “Go back to the villages”. Estimates suggest that post the lockdown 10 million people have migrated in different parts of India and the majority if not all have been urban to rural migration. People have left what is not theirs for what is theirs- home! India now has a chance to adopt a paradigmatic shift in the economic policy.