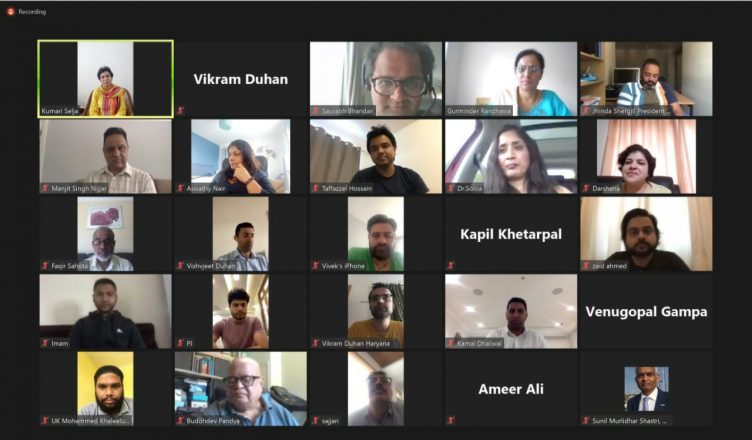 Haryana Pradesh Congress Committee president and former union minister Ms. Selja Kumari interacted with members of the Indian Overseas Congress (IOC), UK via a video conference as a part of the IOC’s ‘Our Heroes, Our Pride’ series. After being welcomed her to the interaction session by AICC General Secretary Mr. Himanshu Vyas, and IOC, UK president Mr. Kamal Dhaliwal, senior vice president of the IOC Mrs. Gurminder Randhawa hosted the session.

A wide range of issues were disused at length and the former minister expressed her views candidly. Responding to a question regarding the BJP government’s response to the pandemic and how they are destabilizing Congress governments in various states, she condemned the BJP’s callousness in dealing with the biggest public health crisis the world has been confronted with in recent times. Ms. Selja recalled how Congress leader Rahul Gandhi’s caution to the government in February about the impending pandemic was ignored by the BJP. She criticized the BJP’s misplaced priorities in organizing the ‘Namaste Trump’ event even as there were riots in Delhi, in addition to several cases of Covid-19 being reported in the country, which if contained in time could have curbed the contagion.

Elaborating her views about the acute gender disparities in Haryana, she said that the issue is a societal one which must concern not just women but also men. Decrying the skewed sex-ratio and several other social practices which are a blemish on human conscience, Ms. Selja urged everyone to fight against the exploitation of women. With several reports indicating that the incidence of domestic violence increased during the pandemic, she explained how the Haryana Congress is fighting the social evil. Helpline cells of the Congress party have been set up in all districts of Haryana and are led by women lawyers who reach out to women in distress.

When a participant drew attention to the misogynistic worldview of the Haryana Chief Minister, M.L. Khattar and the extremely communal views of Babita Phogat, who is a deputy director in the sports ministry Ms. Selja pointed out that the BJP has had a history of actively promoting those with bigoted views. She rued that women who were once icons in sports and other fields have fallen prey to the BJP’s illiberal disposition and are now accomplices in spreading a noxious brand of politics in the country.

A woman participant from Kerala felt that the Congress party must expend more resources on Public Relations, given that the BJP is able to shield itself from criticism in the mainstream media, despite the government’s abysmal performance. In response, Ms. Selja termed the BJP, ‘masters at diverting issues’ and felt that the social media has a crucial role to play in rescuing truth from oblivion in a post truth world. She added that almost all sections of the society, including the traditionally BJP supporting middle classes have been suffering due to the BJP’s maladministration.

The meeting concluded with a vote of thanks and Ms. Selja took notes of the views expressed by participants which she said she will communicate to the party leadership. Overcoming the challenges of the pandemic, Congress leaders have not curtailed their interaction with people and have been actively engaging with them via video conferencing. Several participants felt that this is in sync with the party’s culture of listening to the diverse voices of India and deliberating on various issues to come up with effective solutions.