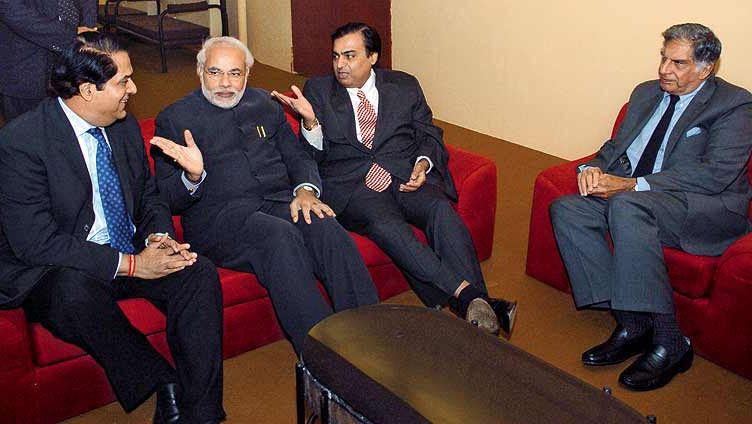 Have you ever wondered why you pay so much for fuel and other essential commodities, while the government has completely abandoned Indians even amidst the biggest public health crisis? Where does all our money go and why are our national assets being sold off to a couple of companies, often in contravention of procedures? Why are our banks being bled to death by massive Non-Performing Assets since the BJP came to power in 2014?

To connect the dots, one must notice the anxieties that the BJP government has in sharing the list of wilful defaulters—those who have the ability to repay, but refuse to do so. A quick glance at the top 50 wilful defaulters will make it clear that they are all close to the BJP. While the banks lend to them, they ‘invest’ in key national assets which are being privatized by the BJP government.

It is not hard to notice that national assets are being sold to the same people who are very close to the BJP. For instance, when in February 2019, the BJP decided to privatize six airports—Ahmedabad, Lucknow, Jaipur, Guwahati, Thiruvananthapuram and Mangalore—all of them were sold to the Adani group, despite being a late entrant into the Airports business. Likewise, the sea ports too are being largely cornered by the Adani group. For instance, in January this year the company announced that it would acquire a 75% stake in Andhra Pradesh’s Krishnapatnam Port in Nellore district, while also taking over the Dighi port in Maharashtra.

Why is it that those closest to the BJP are the ones securing the benefits of privatization and are being treated with kid-gloves when they default? And why is it that in the majority of the PM’s infamously frequent foreign trips, the Adanis and Ambanis have been constant companions, with them clinching trade deals instantly?

Mull over how the Rafael aircraft deal has gone through. The BJP went against the Defence Procurement Procedure, bypassed the Cabinet Committee on Security, sacrificed the ‘Transfer of Technology to India’, waived off the ‘Sovereign Guarantee’ (despite objections from the Law Ministry and the Defence Acquisition wing)—went against several other procedures and practices including superseding the PSU Hindustan Aeronautics Limited—to award the contract to the Reliance Defence Limited, led by Anil Ambani. Why did the BJP reduce the number of aircraft to be procured from 126 to 36 aircraft, while increasing the price per aircraft from ₹526 crore to ₹1670 crore and award the contract to Reliance Defence Limited which was a 12-day old company? And in so doing, the BJP has compromised our national security, particularly when the Chinese are becoming increasingly belligerent.

Meanwhile, the banks which have ‘lent’ money to big corporates have suffered immense losses. The government has written of loans worth Rs 6.66 lakh crore since 2014 till September 2019; estimated to double in the near future. To “recapitalize” the banks, the BJP has to raise its revenue—thereby imposing the highest tax on fuel in the world at 69% even as the international crude oil prices are plummeting. That is why the BJP has actively diminished the RBI’s independence by invoking section 7 of the RBI Act, amongst others to dilute regulatory norms and go slow on corporate defaulters.

Even in the face of the pandemic, not only has the BJP completely abandoned people, it continues to fleece us through the nebulous PM CARES fund. The BJP government refuses to make the details of the fund public, while accepting public money. It must be noted that while the Ministry of Railways is unable to meet its pension expenditure of ₹53, 000 crores for the FY 2020-2021 and even the ability to pay regular salaries for the lakhs of Railway employees is under question, the ministry has announced a donation of ₹151 crore to the PM CARES fund.

None of these issues are being discussed in the Indian media, which has become an accomplice in the BJP aided economic destruction of India. Had the media done its job, the people of India would have long understood that our money is being used to feed the cronies close to the BJP. This is not just a Suit-boot Sarkar. This is a loot and scoot Sarkar.