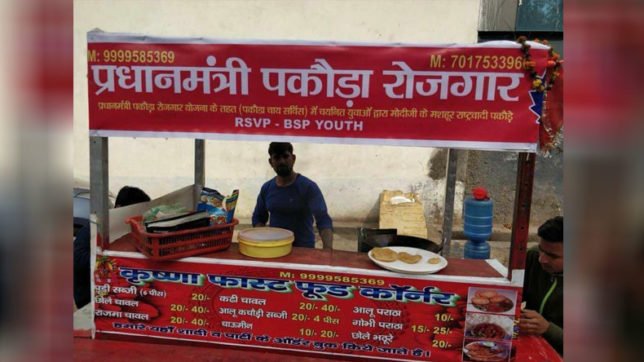 Narendra Modi’s ignorance of elementary economics is one of India’s biggest problems. For the head of government to not know the basics of economics, despite claiming to possess a degree in ‘entire’ political science, could spell doom for any country. No matter how much the leader hides from the press, the ignorance and incompetence cannot be hidden. Indians were embarrassed and worried when Narendra Modi claimed that Pakoda making is a job. Clearly, he wasn’t aware of the definition of a job. Pakodas almost became a pan India euphemism for unemployment.

Despite the apparent reclassification of what a job is, the BJP government posted the highest unemployment rate in 45 years. When the numbers came in, the BJP would have felt a déjà vu as their government posted an abysmal GDP growth rate despite changing the formula to suit their incompetence. Of course, the citizens also felt a déjà vu as the BJP government suppressed the data and claimed that the unemployment report was a ‘draft’.

If it indeed was a draft, the data needs to be updated as the pandemic further deepened our crisis. In June 2020, our unemployment rate was reported to be 10.99% which is a sharp rise from 7.34% in July 2019. In 2014, before the alleged messiah Modi unleashed his ‘Ache Din’, the unemployment rate was 4.9%

Particularly skillful at pushing India into crises at regular intervals, the pseudo Sarvaganani, and wannabe Vishwa Guru has administered several shocks to the Indian economy. The first major one being demonetization which derailed the Indian economy. The unorganized sector which accounts for about 87% of India’s employment took the brunt of the eccentric experiment of invalidating 86% of the value of India’s currency overnight. Jobs were lost. Excuses were found. But there was no turn around. And India was disaster bound.

We braced ourselves for the impact of the ‘aches and din’ which are certain consequences of the BJP being in power. But out of the blue came the pandemic—the aftermath of which is likely to result in more Pakoda making. Once again, the messiah messed up. Rather than take precautions, the pusillanimous Pradhan Sevak announced a parsimonious package which hasn’t reached people. Now we got more Pakodas to make.

However, the pakodas will be hard to sell, because the National Council of Applied Economic Research reveals that across India 45% households report income drops in comparison to last year. The so-called Modi Magic turned out to be black magic which destroyed a robust economy. Deepening the crisis of a 45-year high unemployment rate delivered by the BJP, the pandemic resulted in an estimated 12 crore jobs being lost. Meanwhile, every month a million people join India’s workforce only to find depleted opportunities.

Compounding this problem is that the globetrotting guru and India’s own Great Gatsby couldn’t handle foreign policy with his hugs. Indians will be asked to leave other countries as countries like Kuwait have decided to curb their dependence on foreign workforce. Kuwait has a passed a bill which when enacted will result in 8 lakh Indians returning home. Along with the loss of an estimated $ 4.8 billion remittances from Kuwait, we will have about 8 lakh people to add to our workforce.

Dark clouds have gathered over the Indian firmament on multiple fronts. Hopefully, Narendra Modi will not think about escaping the radar anymore. Narendra Modi must deliver. If not, he must resign and is free to indulge in his delusions of grandeur as a private citizen. India needs jobs. Not fudged data.