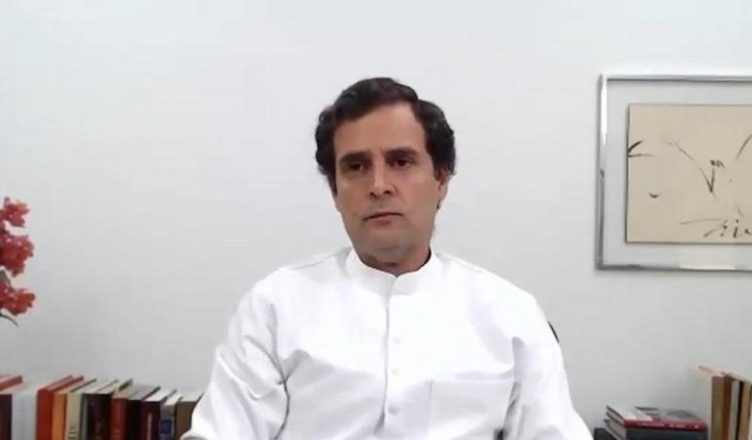 Congress leader Rahul Gandhi held a press conference over video and took questions from various media houses. Reminding the nation that the Prime Minister had stated that the fight Covid-19 will be overcome after a 21-day lockdown, he stated that even with the fourth phase of the lockdown coming to an end, India’s condition is extremely anxious. Refusing to blame the government for its utter failure, as this is not the time for politics, he urged the government to come up with a ‘plan-B’, as India witnesses an uncontrolled surge in the number of Covid-19 cases.

Rahul Gandhi has been interacting with various sections of the Indian society, particularly the poor during the pandemic. Ruing that the plight of the people is becoming worse every passing day, he demanded that the Union government must come up with a clear strategy to overcome both the public heath crisis and the economic crisis. In stressed that the states were fighting a lonely battle with no help from the union government.

Responding to a question about whether India may be focused on health more than the economy, given that India has a massive unemployment problem, Rahul Gandhi said that it is a false binary. He replied that India is smart and intelligent enough to find a balance between health and economy. He added that while it is true that even before the pandemic India’s economy was in tatters, the pandemic has added a new element to our problems and multiplied them.

He said he was sorry to say as a national leader that the future of the Small and Medium Enterprises (SMEs) was very bleak as they are likely to go bankrupt and unemployment will further increase. With the unemployment rate in India being the highest in 40 years, the corona virus has heightened our problems. He reiterated that the bottom 50% of the people must be provided with monetary assistance and not injecting money during such a crisis could be fatal for our economy. In comparison to the BJP’s lack of vision, the Congress ruled states have had a clear strategy as they have increased testing, providing money to the poor, ensuing economic assistance to MSMEs, amongst other measures.

A reporter from Dainik Jagran asked whether India is facing numerous contingencies, particularly on the border with increased Chinese aggression and the brewing Nepal issue. To this, Rahul Gandhi replied that the issues are extremely worrying and that he didn’t want to comment on it further without getting clarity from the government. He said that the BJP government must ensure there is transparency over the matter and Indians have a right to know the details about what is happening in Ladakh and Nepal.

We wish to remind our readers that while Rahul Gandhi and several other top opposition leaders have addressed numerous press conferences, the Prime Minister is yet to take questions from the free press. He hasn’t addressed a press conference since coming to power in 2014. As a result, there is neither transparency nor clarity regarding the government’s strategies and policies. As such, Indian democratic traditions are waning, while Indians continue to suffer.