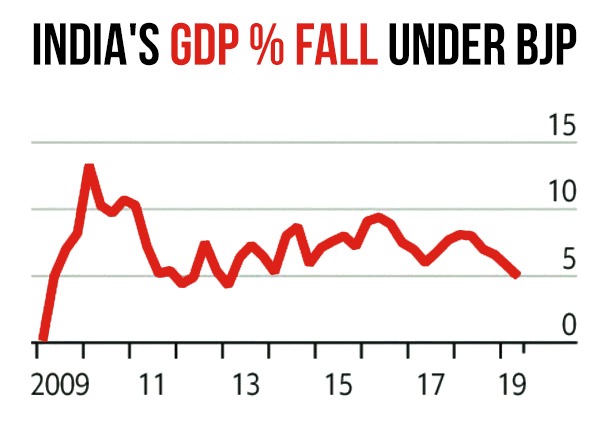 With the BJP government continues to manage headlines instead of managing the economy, India is headed for a massive economic crisis. The modus operandi—or Modi’s operandi—has been to make big bang announcements without explaining the details of what the plan truly is. The PM announces that he will address the nation—most often at 8pm—then makes a headline grabbing announcement, without interacting with the press and providing details. The subsequent day, the media flashes headlines about the grand and unprecedented plan. In due course, a minister gives out details to the press in a relatively low-key event, and the details do not make it to the headlines. This model has been the modus operandi of the BJP government to digress from people discussing their failures on all fronts.

Even the so called ₹ 20 lakh crore stimulus package announced followed the same model. Over the days, the finance minister, provided the details of the stimulus and instead of adding up to ₹20 lakh crore, it is at best ₹3.22 lakh crore, which is a mere 1.6% of our GDP and not 10% as the BJP had pompously claimed. Given the magnitude of the crisis, this is woefully inadequate and it will only worsen the problem as India faces a problem on both the supply and the demand side. What should be worrying for every Indian is that even before the pandemic, the GDP had plummeted and India’s economy was under extreme distress—from crashing banks to the highest unemployment rate in 40 years—our problems were many and the BJP’s only response was managing headlines.

Perhaps, the BJP believes that their lies will have a placebo effect on the economy. A placebo effect is a beneficial effect produced by a drug or treatment which is not attributed to the drug itself, but to the belief of the patient in that particular treatment. While the headlines have been managed, the BJP must realize that the economy, like the pandemic is blind to identities and have no party affiliation. They operate on realities and realities alone. Headlines cannot influence realities. The sufferings of the poor, cannot be assuaged by managing headlines and TV studio debates.

The realities have not been changed as the data indicates. If anything, it has only become worse. Had the BJP government paid heed to the opposition Congress, and implemented the lockdown much earlier, when there were fewer cases, India would have been in a much better situation. However, the Covid-19 virus has spread so much now that the government is finding it hard to manage it. In the last 24 hours a whopping 5242 cases have been reported.

Sadly, the BJP government has been severed from realities for a long time now. Even as late as March 19th, the finance ministry was managing headlines to claim that the pandemic will not have an impact on the Indian economy. And after quietly accepting that there is a massive problem, which the Congress had been cautioning about, the finance minister has not provided a clear-cut strategy to tide over the crisis.

The BJP’s priorities of course isn’t India and her poor people, it’s in managing the headlines and its cronies. As people are walking thousands of kilometres back home in the brutal heat, the BJP is advocating, amongst other things, ways to enhance space tourism. Being drunk on power for six years, the BJP is truly spaced out!