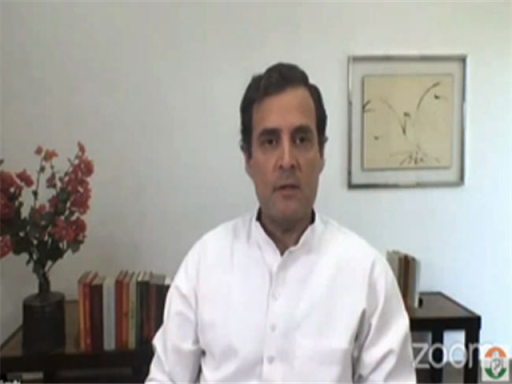 In an emotional appeal, Congress leader Rahul Gandhi while addressing the media via a video conference, called for the BJP government to put aside political differences and work to help the most vulnerable people. He commended the media for bringing out the sufferings and pain of people during the lockdown, and reporting the ground realities putting their own health at risk.

He reiterated that this is not the time for political parties to point fingers at each other, but to come together and discuss strategies to cope with the pandemic and its aftermath. He urged the government to ensure that people have money in their hands as they face the brunt of the lockdown. He said that the NYAY scheme is economically sustainable and that the government can consider implementing it at least on a temporary basis to ensure relief to people and to kick start the economy. He added that if the government desires it can change the name of the scheme, but it is imperative that people’s sufferings are alleviated. Rahul Gandhi opined that the government must not be perturbed by the ratings of foreign agencies, which he said can be ignored in the short term as our economy faces an existential crisis.

He cautioned the government that the economic wreckage the pandemic will leave behind will be catastrophic if we do not brace ourselves for it. He pointed out that the Indian economy faces a unique problem of both the supply and demand being sluggish. The small and medium businesses which generate much of the employment in India have been facing a cash crunch and it is important that they are given a cash stimulus to give the economy an impetus.

Responding to a question regarding whether the government must focus on health or the economy, Rahul Gandhi said that a false choice was being propagated, and that both the health and the economy are paramount. He explained further that without a strong economy that generates employment, people will starve as incomes diminish. He called for a clear-cut national strategy on employment to ensure that the economic crisis we are bound to face will be mitigated.

The interaction was attended by several national and regional media outlets and Rahul Gandhi took questions from across India. Taking note of the hundreds of questions that media personnel wanted to ask, he promised that there will be regular interactions via video conferencing where he will take questions from both the national and the regional media. Meanwhile, today marks the 6th anniversary of the BJP coming to power at the center and the PM has not addressed a single press conference and taken questions from the media. We hope that he will soon find the courage to take questions and answer the Indian public, particularly in times of a crisis.