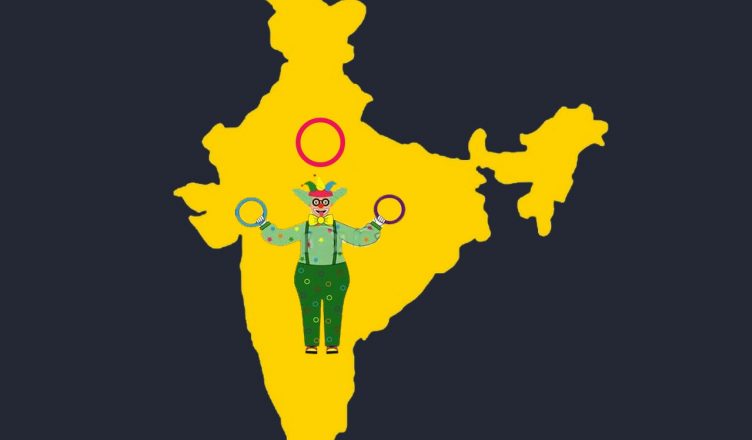 A three-ring circus is an idiom that means that a situation is chaotic; a disorganized spectacle. A whole month into the lockdown, and that’s what it appears to be—a three-ring circus. The Prime Minister instead of assuaging the anxieties of the nation asked people to bang utensils or light candles, apparently in honour of those fighting the Coronavirus pandemic. In both instances the very purpose of the lockdown was defeated as throngs of his supporters indulged in revelry on the streets. There was no announcement made on how the government plans to support healthcare workers by providing them with testing kits of PPE kits. If there was any doubt about the lack of seriousness by the government, it was made clear on the streets by its supporters with much fanfare, cacophony and firecrackers!

While other countries have been working hard to respond to the crisis, India’s health minister was conspicuous by his absence—as were the finance minister and the home minister. There appears to be no concerted effort by the government to tackle the problem. The government probably wishes it away. Or perhaps the diabolical sections in the government see in it an opportunity to further communal schisms in society and project their failures onto the pandemic.

And failures there have been many. An already crumbling and mismanaged economy is now debilitated by an unprecedented pandemic—the economic implications of which are bound to be massive. The country was already facing the worst unemployment rate in four decades when Covid-19 struck. And since the lockdown began on March 25th, unemployment has tripled according to the Centre for Monitoring Indian Economy.

It is now expected that we will officially enter a recession. It will be the first contraction of the GDP for 12 months since 1979, when the Janata government was in power. The government announced a spending package of ₹ 1.7 trillion at the beginning of the lockdown. But this is woefully inadequate to enhance demand. The demand had been sluggish even before the pandemic set in, and the government was clueless. Either it was clueless or it did not want to admit that its policies over the years resulted in weakening India.

It appears that the latter is true. Because despite the opposition Congress party offering solutions, and cooperation to ensure better financial management, the government has not responded. Opposition leader Rahul Gandhi even stated that the BJP is free to rename the NYAY scheme and stake credit for it, if its only fear is that its spurious policies would be exposed. Yet, the government maintains an eerie silence even as the country descends into further economic crisis.

Rather than working on helping the millions of poor people stranded, and those who have lost their livelihoods, the government announced the PM CARES fund, without explain the need for it when there already exists a PM Relief Fund, into which donations can be made. Suspicious over the governments increase because the PM CARES fund will not be audited by the Comptroller and Auditor General of India. Moreover, contributions made to the PM CARES fund will qualify as CSR expenditure, but contributions made to the CM Relief Fund of states will not be. The government has not explained this absurdity.

The actions of the government make it clear that it is neither a compassionate nor a cerebral one. And to digress from matters national importance, it indulges in showmanship. From clanging utensils to lighting candles; from communalizing the crisis to poorly scripted antics from Arnab; there are attempts galore to deflect attention from the reality that the present union government is the most incompetent in the history of India. The tragedy of India since 2014 is that, instead of an efficient government, we have a very creative ringmaster at the helm. He’s got many an idea to perform the three-ring circus.