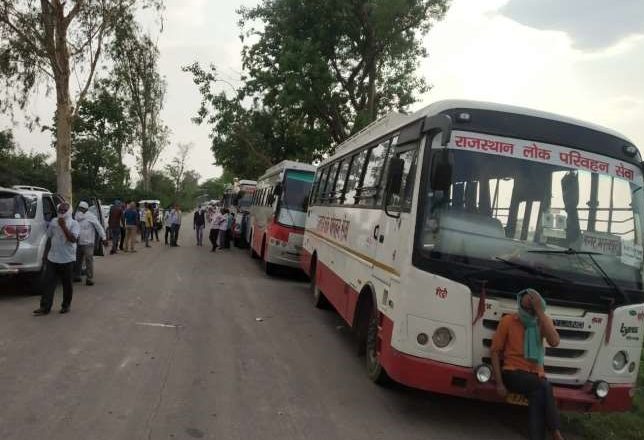 There is no subtle way to put it. An administration that stymies efforts to transport migrant workers back home lacks humanity. Rather than working to ensure that the most vulnerable and poor people are brought back to their homes, or facilitating their return—or at the very least not interfering in efforts by the opposition to do so—the BJP government in Uttar Pradesh is being inhumane in the treatment it is meting out to the poor.

With the BJP leaving the poor to fend for themselves and completely abandoning their responsibilities and duties, the opposition Congress has been toiling hard to ensure adequate relief is provided to migrant workers stranded across India. With absolutely no planning by the government and no facilities organized for them, millions of migrants are walking back home in the scorching heat, carrying their children and belongings. Several people have taken to travelling in trucks despite the risks. Only a few days ago, scores of people died in a road accident, as migrants attempted to come back to their villages in Uttar Pradesh. The visuals of little children wailing beside their parents’ corpses anguished the entire country. In response, the Yogi government imposed a complete ban on road travel—including by foot—and lakhs of people were put at the mercy of the state. The following day, there were reports of migrants at a state shelter home being assaulted by police who called them a ‘blot on the face of India’. Ironically, the BJP had decided to ‘celebrate’ their successes in six years, rather than make attempts to ensure the safe return of stranded migrants.

Pained by their plight and as a part of the nationwide relief work that the Congress party undertook, Priyanka Gandhi, organized for 1000 buses to be deployed to bring migrant workers back to their homes in Uttar Pradesh. However, the Yogi Adityanath government began stymying the attempts to help the stranded and starving migrants. Despite providing all the details of the buses, their condition and the details of the drivers and conductors, the Uttar Pradesh state administration repeatedly asked for the same details over and over again. And in a late-night e-mail, the BJP administration had asked for the 1000 buses to be handed over to the state at Lucknow. The plea that such an uncalled-for response from the state administration is only wasting critical time in coming to the aid of migrant workers fell on deaf ears. The BJP led Uttar Pradesh government has now asked Priyanka Gandhi to provide buses for carrying migrants to the district magistrates of Ghaziabad and Noida.

It is unconscionable that at a time when millions of people are starving on India’s highways, with hundreds of deaths resulting from ill-planned policies, the BJP continues to hinder every effort of the opposition to help the poor people. Over the past six years, the BJP has acquired the moniker of being the ‘Soot-boot Sarkar’ for its crony capitalism, but its attitude towards the poor even in times of such a crisis is sheer inhumanity. For a government to not only abandon the poor, but stymie every effort to help them—even as they are dying—is diabolical. Perhaps, the BJP gave us a hint of their inhumanity when they advocated building both Shamshans and Kabristans in equal number during the elections to Uttar Pradesh!