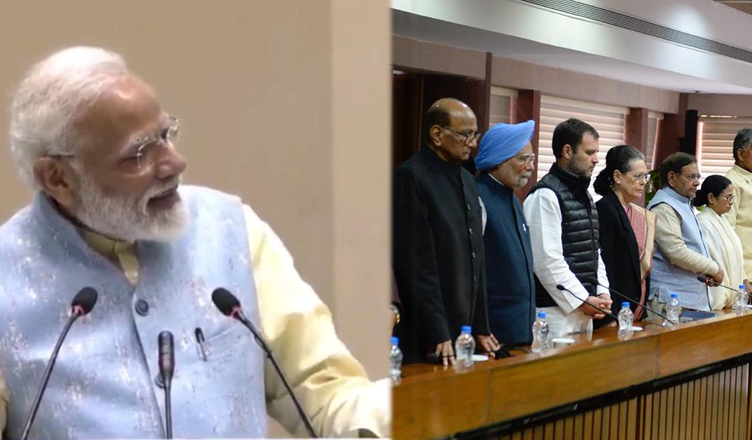 While every single citizen along with many political parties, including the Congress are praying for the safe and immediate return of Wing Commander Abhinandan, who is currently in Pakistan custody, and indifferent Bharatiya Janata Party (BJP) has decided to go ahead with its schedule of campaigning for the upcoming 2019 elections, because of course, power is their only aim.

It was intimated yesterday that Congress President Rahul Gandhi has postponed the Congress Working Committee (CWC) meeting and the ‘Jan Sankalp rally’, which was otherwise to be held today, due to escalating tension between India and Pakistan.

On the other hand, we have our ruling party and our Prime Minister who is still silent on the loss of our army men. Instead, they have continued with their campaigning and inaugurations.

Yesterday, PM Modi launched Sports Authority of India’s (SAI) first-of-its-kind mobile application, ‘Khelo India App’ in order to create awareness about sports and fitness in the country. However, at the event, there was no mention about Wing Commander Abhinandan or any praise for our armed forces.

Today also, he was seen interacting with volunteers and party workers from across the country via video conferencing. It could be seen how he associated the recent situation with his government and how the country is becoming stronger under their regime.

While the BJP is concentrating on votes by running #MeraBoothSabseMazboot hashtag on Twitter, Congress is only echoing all the people’s voice by supporting the #MeraJawanSabseMajboot on social media.

It shows what matters more for two of the strongest political parties of the country. For one, jawans are the priority and for the other, votes.

One thought on “Misplaced priorities: While Congress cancels CWC and rally, BJP goes ahead with PM Modi’s video conference”