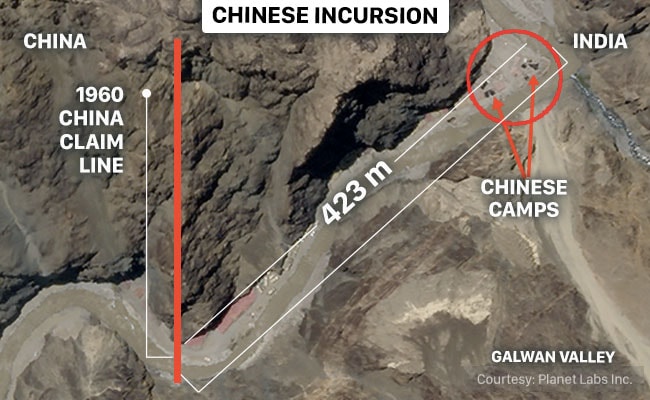 Despite the best efforts of the pliant media to cover-up Narendra Modi’s lack of knowledge or nuance, it becomes glaringly apparent every time he speaks. After he told the all-party meeting that no foreign force has intruded into Indian territory, PM Narendra Modi’s words have been used by the Chinese and international media to claim Galwan Valley as a part of Chinese territory. The Prime Minister unwittingly implied that Galwan isn’t a part of India.

Meanwhile, several reports indicate that the Chinese have put up Mandarin language signages at the Pangong Tso lake—8 km into our territory—and entered a whole 423 meters into the Galwan valley. For all the grandstanding the BJP displays in scripted media interactions, their meekness in surrendering to the Chinese threat is compromising India’s territorial integrity. During the all-party meeting, the Prime Minister hadn’t even found the courage to name China in his statements and claimed that ‘all is well’ on the frontiers.

However, he made a “surprise” visit to Nimu in Leh, which many people on social media were anticipating as an effort to repair his damaged image. Narendra Modi visited the tourist destination popular for its rapids and river rafting expeditions. The media on cue has claimed that Narendra Modi made a ‘surprise’ visit to the ‘forward post’ of Nimu. Once again, Narendra Modi implies that the Chinese have advanced upto Nimu by claiming that it is a ‘forward post’. The Prime Minister must explain whether this is true and if India’s territorial integrity has been compromised so much that we now refer to Nimu as a ‘forward post’.

Further, the Prime Minister must retract his statement that no foreign forces have entered Indian territory and come clear with the facts. Merely deleting a few Apps is not going to augment our efforts to defend India’s sovereignty and territorial integrity. The Prime Minister of the country must take the opposition into confidence and be transparent.

Creating a smokescreen to hide the BJP’s incompetence is only going to further damage India’s integrity. This matter has grave consequences for our sovereignty and India’s future. We cannot allow India’s territory to be compromised to defend the incompetence of individuals and political parties. India’s security cannot be held to ransom by partisan politics. The Prime Minister must immediately call for a special parliamentary session to discuss the matter. He must place the facts on the floor of the house and take the opposition and the people of India into confidence.

India belongs to Indians. And the Prime Minister is answerable to the people of India, represented by the parliament. He cannot escape scrutiny and the BJP cannot use national tragedies for electioneering as it has attempted to do in the past. The self-proclaimed nationalists must respond to citizens’ queries on why the government has failed to protect our territorial integrity. As responsible Indian citizens, we must seek answers from the government and pin them down and not fall prey to the smokescreen they create every time their failures are exposed. If we do not question the government we will be failing our duties as Indian citizens.