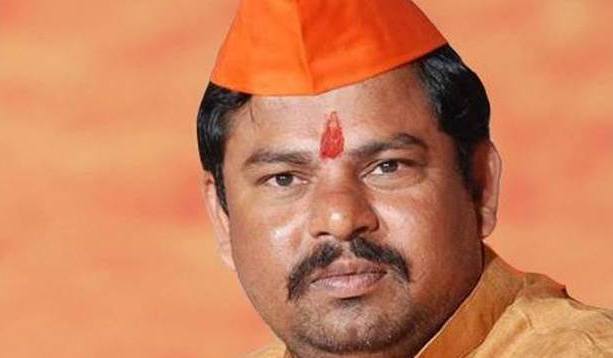 Hyderabad BJP MLA T. Raja Singh has said that one is not a Hindu if he does not attend daily meetings held by the RSS – called ‘shakhas’.

At the same time he said, “Wherever there are daily meetings, you have to go there and do not forget that the person who does not go to this branch, should not call himself a Hindu.

This controversial statement made by the MLA at a meeting in poll-bound Madhya has become viral on social media.

“I request all of you to enrol yourself in nearest branch of RSS. Any Hindu who doesn’t join RSS isn’t a true Hindu and is thus incapable of serving our nation,” he added.

Singh further said that every person living in India should chant ‘Bharat Mata ki Jai’ and ‘Vande Mataram’ irrespective of their religion or else they are free to leave the country.

“No other country will tolerate anyone chanting ‘Bharat Mata ki jai’ but we have people in our country who say ‘Pakistan zindabad’ and hail terrorists like Afzal Guru,” he said.

MLA from Goshamahal in Hyderabad, Singh then launched an attack on All India Majlis-e-Ittehadul Muslimeen leaders, Asaduddin and Akbaruddin Owaisi.

“Muslims are becoming anti-nationals because of the Owaisis. People should not fall into their trap and should understand that these brothers are playing dirty politics and will continue to do so,” he said.

He also asked Hindus to work for the betterment of their religion by fighting the evils like “Love Jihad” and “paid conversions.”

Listen to his entire speech here: