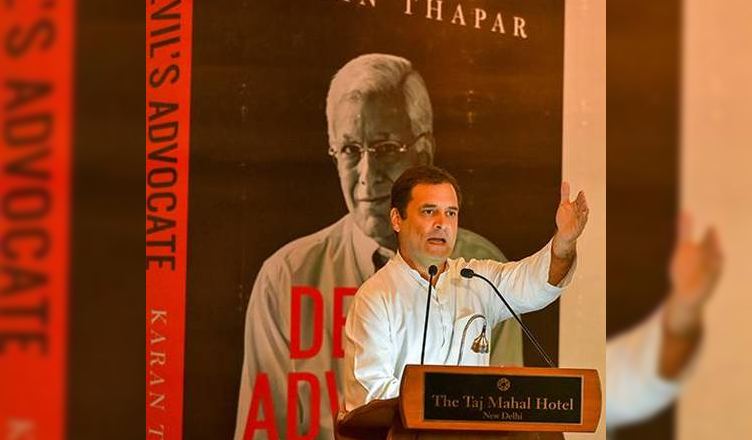 Congress Chief Rahul Gandhi on Wednesday asserted that one can fight with someone but he does not have to hate him.

“You can fight someone with all your might but hate is a choice. It’s an active choice that you make. That is something very important to understand,” Gandhi said while speaking at the launch of senior journalist Karan Thapar’s book Devil’s Advocate: The Untold Story.

The Congress President opined that it is okay to fight conflicting views, but the person does not need to hate that person in order to fight him.

I might disagree with Mr. Advani and I might have a different conception of the country from that Mr. Advani does and I can fight with Mr. Advani on every single inch, but I don’t need to hate him. I can actually hug him and fight him,” he said.

Standing by his words, the Gandhi scion said he would always follow the same belief but he does not expect the same from the Bharatiya Janata Party (BJP).

“If there is one thing our religion teaches us is that you absolutely cannot get imprisoned by hatred. That is what my endeavour is. I will take on Narendra Modi ji, but I don’t need to hate him. I don’t know if I can expect the same from them,” he said.

“The atmosphere in India today, in my perspective, is coloured with a lot of hatred, anger and frustration,” he added.

Gandhi recently hugged Prime Minister Narendra Modi in Parliament, emphasising on the same belief that he would love his opponents no matter how conflicting their views might be.

Referring to the same, he said, “Now whenever I come across BJP MPs, they sort of take two steps back as they think I will hug them. But it is not such a bad thing.”