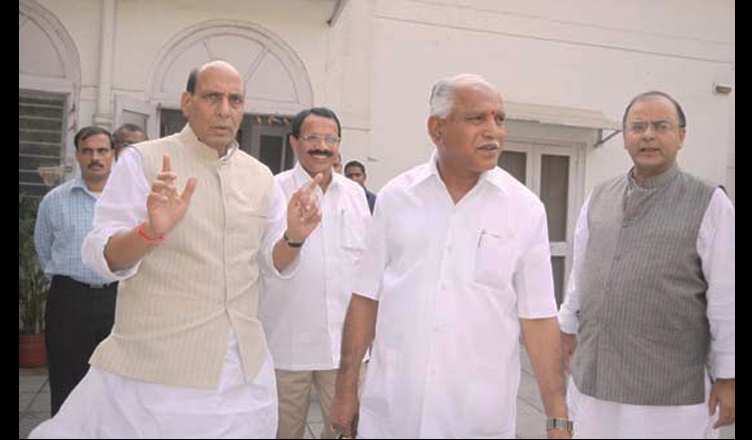 The Income-Tax department is in possession of copies of a diary in which entries have been made in the handwriting of former Karnataka Chief Minister and prominent Bharatiya Janata Party (BJP) leader B.S. Yeddyurappa regarding money amounting to over Rs. 1,800 crore paid to the BJP’s national leaders, its central committee, judges and advocates.

According to The Caravan, the alleged payouts were recorded by Yeddyurappa in a Karnataka’s state assembly legislator’s 2009 diary, in Kannada and in his own hand and that copies of the same are with the I-T department since 2017.

Along with this, it is also noted in the diary that Yeddyurappa paid Rs. 10 crore for “Gadkari’s son’s marriage.”

Yeddyurappa was the Karnataka Chief Minister From May 2008 to July 2011. The entries regarding advocates and judges have been made against rows dated January 17, 2009, whereas entries regarding BJP central committee was made against rows dated January 18, 2009. However, The Caravan reported that it is unclear whether the entries were made on the same dates or recorded in the diary on a later date.

It has also been reported that the I-T department was in possession of the copies of the diary pages since August 2017 but has not taken any action with regard to it till date.

Also, a senior income tax official took the copies of the same to Jaitley, along with an unsigned cover note which asked whether an investigation by the Enforcement Directorate (ED) was viable. But Jaitley, who is also one of the receivers in the entries, ignored the compliant and chose not to act.

Apart from the payouts made to the BJP top brass, the entries in the diary also include amounts allegedly paid to state legislators in Karnataka, who played a pivotal role in helping Yeddyurappa becoming the CM in 2008.

The Caravan quoted one of the entries made in the diary which begins with, “Gali Janardhana Reddy is the key person to make me CM,” signed by Yeddyurappa, and followed by the line, “Details of persons for whom, money is given by Janardhana Reddy.”

It then mentions the names of eight leaders to whom Rs. 150 crore was allegedly paid. The entries include names such as PM Narendraswamy, who won as in independent in 2008, Anand Asnotikar Vasant, who won on a Congress ticket, Balachandra laxmanrao Jarakiholi, who won on a JD(S) ticket. Seven of the eight leaders mentioned in the entries have Rs. 20 crore written against their names whereas Rs. 10 crore has been written against the name of Jarakiholi.

It is believed that these ministers were lured by Yeddyurappa into supporting him for proving majority in the state, and therefore, he became the CM.

The diary also notes that these alleged payments were made to the politicians by Gali Janardhana Reddy, one of Karnataka’s richest politicians.

Another list which was found in the diary entries was under the title “Money received/paid to me” from 26 people with amount ranging from Rs. 5 crore to Rs. 500 crore. According to The Caravan, Yeddyurappa received a total of Rs. 2,690 crore from these 26 people which included, former BJP state cabinet ministers, such as Basavraj Bommai, Aravind Limbavali, Murugesh Nirani, BJP leader K. Subramanya Naidu, and BJP MLAs such as J. Krishna Palemar, C.C. Patil and Laxman Savadi.

The main question which arises is that why is the IT department sitting on copies of these entries since August 2017.

The senior IT official, who sent the copies of the diary to Jaitley, mentioned in his official note that the I-T department “protected the interests of the BJP leaders. Since this matter is connected to the BJP leaders of Karnataka and also in Delhi, no further investigation has been done till date.”

In the note, the senior official had also laid out the need for further investigation into the contents of the diary and had also sought legal counsel.