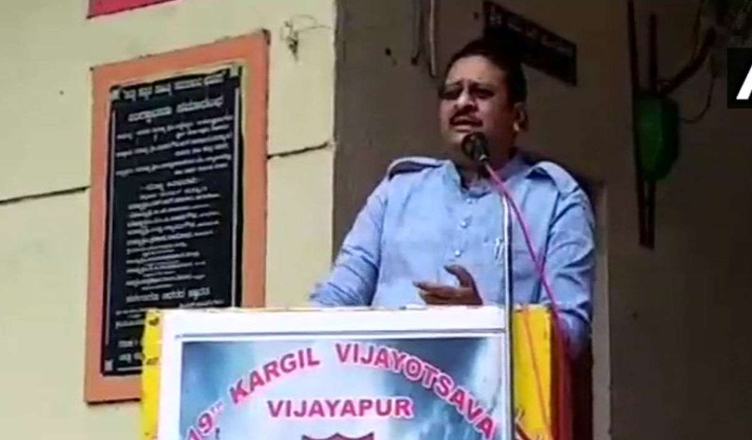 In what can be termed as an extremely outrageous statement, Karnataka Bharatiya Janata Party (BJP) MLA Basanagouda Patil Yatnal said, had he been the Union Home Minister, he would have issued orders to police to shoot all intellectuals.

Not only just this statement, the MLA from Vijayapura went more ahead by branding liberals and intellectuals as ‘anti-national’.

While addressing a Kargil Vijay Diwas event in Karnataka’s Vijayapura, Yatnal said, “These people (intellectuals) live in this country and use all the facilities for which we pay tax. Then they raise slogans against the Indian Army. Our country faces grave danger from intellectuals and seculars than anyone else. If I was Home Minister, I would have issued orders to shoot them.”

The MLA is used to getting into controversies.

Earlier also, he invited criticism when he told local party municipal members to not help Muslims.

A video regarding the same had gone viral on social media.

“I had called all corporators and have told them that they should work for Hindus and not Muslims…who have voted for me in Bijapur,” Yatnal was seen saying in the video.

“I had said no to Muslims initially…I had instructed my people that those with topi (cap) and burkha should not come and stand in my office or beside me,” he said.

BJP leaders are accustomed to making such controversial statements.

In another such instance, senior BJP MLA from Uttar Pradesh Hari Om Pandey has said that crimes such as rapes and murders are on the rise because of the rapid growth in Muslim population.

“Terrorism, rapes, cases of sexual harassment are prevailing in India only because of the rising Muslim population. If one looks closely, there is a rapid increase in the percentage of Muslims since the time of independence,” he said.

It is deplorable to see ministers of the ruling party come up with such insensitive statements, which will do nothing but only ruin the social-secular fabric of the country.