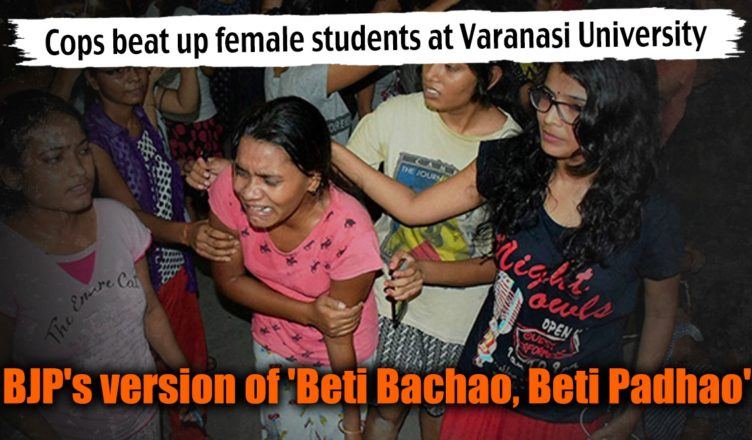 The brutality inflicted on protesting female students at Banaras Hindu University is a result of Modi’s RSServation policy at the administration level of India’s universities.

There has been a marked change in social attitudes on university campuses since the Modi Sarkar’s campaign to embed RSS ideologues as Vice Chancellors and chairpersons of academic fora and committees. Spearheaded by the BJP high command under the aegis of the Human Resource Development Ministry, a saffron brand of McCarthyism is upon us all.

Banaras Hindu University’s VC Professor Girish Chandra Tripathi is characteristic of the same. This is why the non-violent protest led by students for ignoring a girl students complaint against a security guard’s inaction, while she was being sexually harassed by three men on bikes on campus, was dealt with police brutality and baton charge. Instead of registering her complaint, her character was questioned for being out past curfew.

The atrocity was condoned as being in the interest of ridding the campus of nonviolent protests that had been allegedly scaled up by those who wanted to cast a shadow on Prime Minister Modi’s impending visit.

BHU students’ defiance against an administration that has allowed the noxious men in shorts to march through campus on RSS’s foundation day is a form of deshbhakti too pure and uncompromising for those infected by its bigoted and narrow nationalism to appreciate.

Any rational Indian would proudly endorse their non-violent protests and stand by them unapologetically, trusting that ‘only the test of fire makes fine steel’.