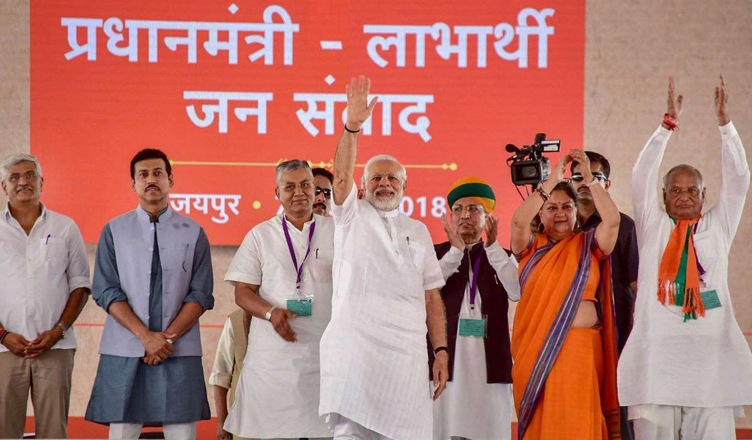 In another incident wherein people were trained by the government officials to answer Prime Minister Narendra Modi’s questions ‘positively’, a woman from Jaipur has claimed that she refused to lie when asked to answer the PM’s questions in a “positive” manner.

During a rally in Jaipur on July 7, PM Modi interacted with the beneficiaries of the central government schemes. However, Manju Devi woman has claimed that when she was asked by some BJP members to answer PM Modi’s questions positively’, she refused.

Reportedly, a few people were trained by the Vasundhara Raje government and only those were made to interact with the Prime Minister. People were instructed on the answers to be given for the questions to be asked by Modi during the rally.

Speaking to ABP, Devi said, “I got two instalments of Rs 2,500 each after the birth of my daughter under the Raj Shri Scheme. I was told to give answers to Modi in positive and not ask any question.” She refused to lie about these benefits and withdrew herself from participating in the discussion with Modi.

In another such exposure by the ABP channel, it showed a woman farmer was trained in order to respond positively to PM Modi’s questions.

The Prime Minister asked a woman, “Has your income doubled?” to which the woman replied in positive. She said her income had doubled.

A channel’s reporter traced down the woman and spoke to her. The woman, identified as Chandramukhi Kaushi hails from Chhattisgarh’s Kanker district.

On being interviewed, it was revealed that what she said was in stark contrast with ground reality.

When the reporter asked her, “Did the income double due to production of grain?” to which Chandramukhi replied, “No”.

What was further revealed by Chandramukhi that she was given training to say this.

She revealed that an official had come from Delhi and gave her training. During the training, the official instructed her to say her income had doubled.

It’s hard to believe that even the words that come out of a person’s mouth are also controlled by the government now.