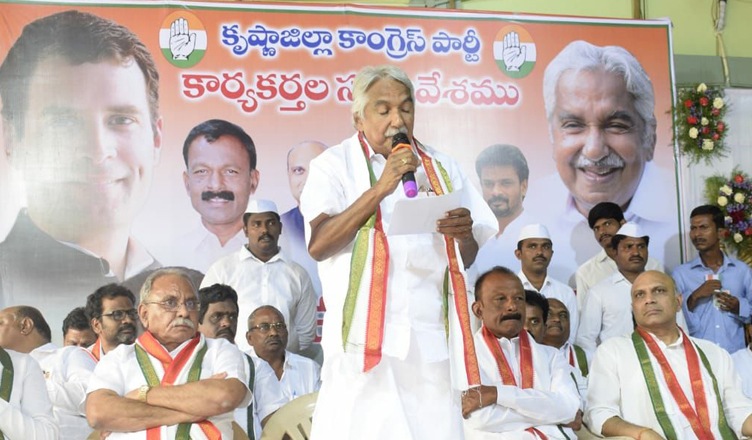 A few years ago, the former Kerala Chief Minister, Oommen Chandy, won over the internet when news broke out that he had travelled as a simple citizen in the sleeper class coach of the Sabari Express. The Sabari express is the most popular train for the devotees of Lord Ayyappa who throng to Sabarimalai every year, after living a simple life sans luxury to pay penance. Perhaps the train has an uncanny association with simplicity and it brought the veteran Kerala leader to Andhra Pradesh in 2018, when he was appointed the General Secretary, in-charge of the state.

With his arrival, the state Congress has evidently received a shot in the arm and is growing in confidence. The internet is rife with rumours that the former Chief Minister of the state, N. Kiran Kumar Reddy is slated to return to the party on the 13th of July, after keeping away from politics post 2014. There is a perceptible change in the mood of the leaders and supporters of the party who are looking more confident.

The anger against the party which was perceived to be responsible for the bifurcation, (despite all major parties claiming ‘credit’ for it), is beginning to subside and people are beginning to question the TDP and BJP about the unkept promises.

It may be recalled that when the UPA government announced that the state of Andhra Pradesh would be given the Special Category Status for five years, the BJP led by its senior leader Venkaiah Naidu, demanded in the parliament that it be extended to ten years. In the election rallies of 2014, the promise of according Andhra Pradesh the special category status was made numerous times. However, once the elections were over, the BJP began dilly-dallying over the issue.

KVP Ramachandra Rao, a Congress MP from the state took up the issue regularly in parliament but his arduous efforts were met with much filibustering and disruptions by the ruling party. Finally, the government brazened it out and said that the state cannot be accorded the Special Category Status as it doesn’t meet certain criteria.

Nevertheless, with the elections approaching, the TDP post the budget session in 2018, pulled out of the NDA, citing the injustice being meted out to the state. And in doing so, Chandrababu Naidu found a scapegoat in the BJP onto which he is projecting all his government’s failures. During the 2014 elections Chandrababu Naidu made tall promises that were borderline demagoguery—such as promising two thousand rupees a month for the unemployed, without pragmatically explaining how he would fulfil such promises. The people too didn’t question him much because the Telugu media (much of which is sympathetic to the TDP) had whipped up the emotions of the people over the bifurcation. They amplified the TDP’s rhetoric and people felt betrayed.

With unkept promises, rising unemployment, crimes and inflation, a sense of alienation is increasing in all sections of society. The people are increasingly contrasting their lives with the pre-2014 days and beginning to realize that identity politics will not feed them, but rational and well thought out policies do. They are now looking for an alternative.

Oommen Chandy’s task is to convince the people that the Congress is the solution. He will undertake a tour of the state’s 13 districts starting from the 9th of July. He has appealed to the former leaders of the party to return and make it the bastion that it was only five years ago. As he kicks-off his tour, there is new found enthusiasm amongst the leaders and cadre of the party as they realize that the Congress is not a spent force as its detractors claim it to be. While Oommen Chandy has started off well and former leaders are returning to the party, realizing that turning the party around is no mean task. As the saying goes—the woods are lovely, dark and deep…and the Sabari express is chugging through it!