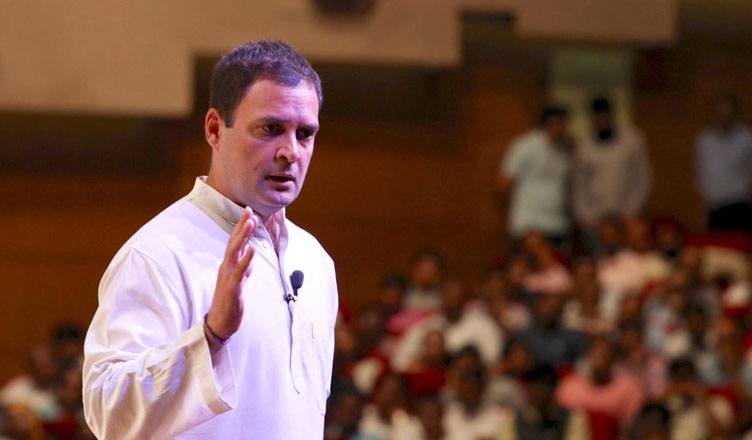 Assuring a huge crowd comprising professors of restoring autonomy to public institutions, Congress President Rahul Gandhi on Saturday said he will reverse the centralisation of power that has been done by the Modi Government.

“I am promising one thing to you. We will reverse their centralisation and removal of your autonomy. We will restore your freedom of thought,” Gandhi said while addressing a gathering of Professors in New Delhi.

Praising the ones who impart education, Gandhi said that a guru is someone who guides you, gives you direction and can articulate himself and that the Indian education system must be allowed to have its own voice.

Gandhi asserted that education is a strategic resource.

“There can be private education but the guiding light must be public education. Private institutions should look up to public education. Education should be seen as a central part of our development vision. It is a strategic resource,” he said.

Attacking the Modi Government, the Congress chief said that the educational institutions and people who are a part of these institutions are under attack and there is an attempt to impose a single ideology on them.

“I understand you feel under attack. One ideology is pressuring you. This feeling is not in your heart alone but in every citizen’s heart. A country of billion people cannot possibly be run on one single idea,” he said.

He further said that the reason behind this attack on institutions is that there are monetary benefits for RSS.

“If you read by Vyapam, you will understand how money can be made out of the education system,” he said.

“When we allow our people to talk, that is the strength of our country. I will listen to you and whatever you say will stay with me. The day I can effect it, there will be change. I want an ongoing conversation with you. The Congress party listens. We may sometimes not agree with you or vice versa. But we must talk. We owe you respect, honour and dignity,” he further said.

Slamming RSS for viewing India as a product, the Gandhi scion said he believes in being a reflection of what is there in the hearts of Indian citizens.

“There are two visions of India. Our vision of India constitutes of people who live in it. The only way to understand India is talk to its people. The RSS’ vision of India, like Amit Shah said, is that of a ‘golden bird’. They view it as a product, how it is to be utilised and they decide on who utilises it. For me, it is impossible to lead India, without having a conversation with India. The idea is, I should be a reflection of what is in your heart,” he said.

Gandhi reiterated that teachers are a very important resource in the country, who work in extremely difficult circumstances. Moreover, he invited the teachers to assist the Congress in drafting policies about the education sector in its manifesto.

“Congress party is commencing it’s work in drafting a manifesto. I want the teachers to form a delegation and come to us with your demands,” he said.