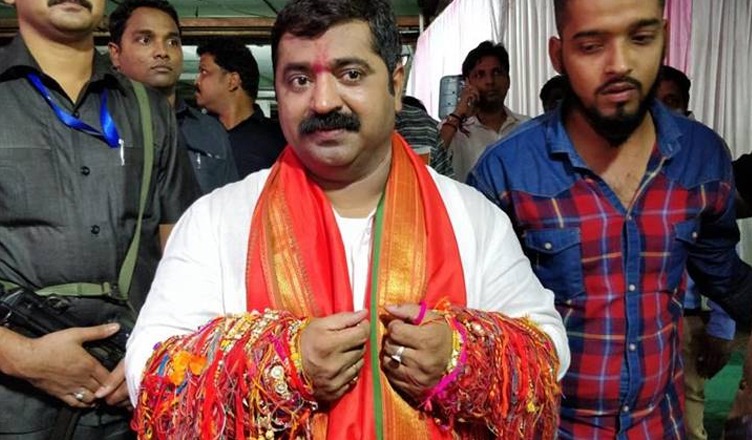 Misogyny is deeply rooted in the Bharatiya Janata Party (BJP) cadre. Proving the same, a Maharashtra BJP MLA has offered to help youths in his constituency get married by “kidnapping girls” who had rejected them.

While speaking at a Janmashtami function he organised, Ghatkopar legislator, Ram Kadam said he would help boys get married by kidnapping girls of their choice, who had earlier rejected them.

“Note down my cell number and give me a call to resolve any problem,” he is seen telling the gathering in the video clip. “‘Sir, I proposed her but she rejected me, please help.’ I will help you for sure. But first come to me with your parents. If they say yes, we also like that girl, then what will I do? I will kidnap the girl concerned and hand her over to you (for marriage),” Hindustan Times quoted Kadam as saying.

Also read: Congress condemns arrest of Lois Sofia, says it is an assault on freedom of speech

State Congress chief Ashok Chavan strongly condemned the statement and said that the BJP had given the slogan of ‘Beti Bachao, Beti Padhao’ (Save Girls, Educate Girls), “but its own legislators are talking about ‘Beti Bhagao’ (kidnap girls). Girls now need to be protected from politicians.”

BJP’s ally Shiv Sena also slammed Kadam for making such a statement and sought an apology.

“One BJP MLA has offered from a stage to help boys kidnap girls and marry them even against the will of the girls. I guess he believes marriage is like forming a govt. Ashamed and disgraced that he sits in the legislative assembly of Maharashtra- a land of culture & women liberty. Not just an outright apology from him, but I’d want to know from the Home Minister of Maharashtra what action will be taken for openly making such statements that threaten the safety of girls and offering safety to those wanting to kidnap them,” Sena leader Aaditya Thackeray said on Twitter.