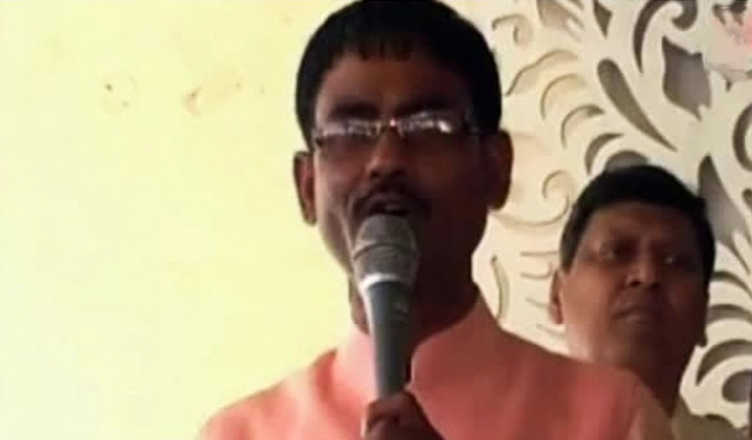 Bharatiya Janata Party (BJP) MLA Vikram Saini raked up a controversy on Friday when he said that all those who feel insecure in the country should be bombed.

“My personal view is that those who say they feel unsafe  and threatened in India should be bombed, give me a ministry and I will bomb all such people, not even one will be spared,” Saini said while talking to media.

“Such people are traitors. Some arrangements must be made for them. They should be punished. They should leave the country. Why should you stay here, if you do not have any patriotic feelings towards your country? If you feel unsafe, go where you feel safe. Who has stopped them?” he further said.

“I am not singling out anybody from any particular community or caste. A strict law should be there to deal with people who speak against our country. There are a number of countries where such people, who talk anti-national things are hanged, but our country doesn’t have a strict law and that works in their advantage,” The Indian Express quoted Saini as saying.

#WATCH Vikram Saini, BJP MLA from Muzaffarnagar says 'My personal view is that those who say they feel unsafe and threatened in India should be bombed, give me a ministry and I will bomb all such people, not even one will be spared' pic.twitter.com/E9yWNH7MBF

Later, while clarifying his statement, Singh said that this is language that is spoken in his village.

Congress leader Raj Babbar condemned Singh’s statement and said, “The CM says ‘thok do’, an MLA who aspires to be a minister says will bomb people. He should be arrested and punished. He is speaking like a terrorist and must be probed for terror links. We request that a case be registered against such people.”

This is not the first time that Saini has made such a controversial statement. While addressing a meeting in Uttar Pradesh’s Muzaffarnagar in February 2018, Saini had said that those who follow the principle of  “hum do, hamare 25”, should be imposed upon with the policy of “hum do, hamare do.”

Earlier, he had attacked Christians and had said that New Year was a “Christian practice” and not a Hindu festival, and therefore it should not be celebrated.

One thought on “Will bomb those who feel unsafe in India: BJP MLA”