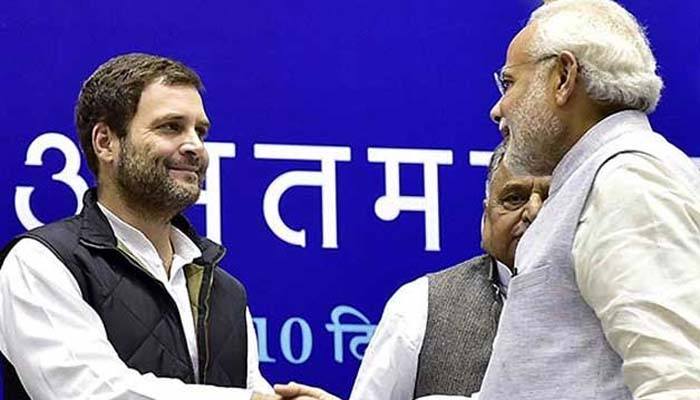 Delivering a speech at the launch of the Save the Constitution campaign, Congress president Rahul Gandhi challenged Prime Minister Narendra Modi to have a 15-minute debate with him. As expected, he was ridiculed by his political opponents, especially the BJP. On Tuesday (April 24), #RahulDaresModi trended on Twitter indicating the deep interest people have in the idea. Rather than blindly mock the idea, it would be good if the powers that be consider it and organise such debates both in Assembly and Lok Sabha constituencies.

Can you handle it, PM Modi? We doubt it. #RahulDaresModi pic.twitter.com/zBtrZrJt5p

Even though India follows a parliamentary system of governance, it would indeed be a good idea to incorporate the tradition of a debate between the two principal coalitions. This could be held as an informal event without complicating it with parliamentary procedures. And this is certainly doable because the Zero Hour evolved without Parliament being explicit about rules and regulations.

We could start thinking about a bi-annual event in which the leader of the government and the leader of the Opposition engage in a televised debate. This would ensure that the din of protesting members of Parliament doesn’t drown out discussions around crucial events and people get to know what exactly their top leaders think.

Also, it will make it difficult for the ruling party’s leader to duck difficult questions. In a televised debate, between two leaders, it is most likely that decorum will be maintained and perhaps even a few moments of camaraderie. It could enhance the quality of public discourse and politics will not easily descend into vile trolling.

The audience too should comprise of equal number of supporters nominated by the leaders of the two debating parties. This will eliminate the scope of choreographed applauses or targeted jeering. If at the end of each debate a dinner is hosted and the leaders of the two parties reiterate that in politics there are only opponents but never “enemies”, it would go a long way in curbing the animosity displayed online and beyond.

Such debates will also promote maturity and the culture of dialogue, thereby enriching the Indian democratic traditions. Rather than trolling one another, something sadly, even senior ministers are indulging in, civil society would then be guided to deliberate over various pertinent issues the country faces. The choice of the topic can be arrived at by consensus by both leaders well in advance so that they can both have sufficient time to be prepared with facts.

As disappointed citizens watch session after session being washed out without important matters such as price rise, rising intolerance, unemployment and so many more pertinent issues being discussed, a public debate will certainly return some sense of sanity to our public discourse. The scope for a “walkout” by either of the parties will be eliminated in a scenario akin to a duel. In times where the ruling dispensation avoids taking questions by the Opposition, nary a press conference, an extra legislative debate would certainly give people a glimpse of what each leader’s calibre is.

The media’s role should be minimal and restricted to telecasting the debate so that they don’t influence the debate in any manner. The moderator can be selected by consensus so that there is no scope for accusations of favouritism or bias. The rules of the debate can be formulated by a panel comprising eminent intellectuals selected by the two leaders or their representatives.

Modi should therefore accept the challenge and engage Rahul in a debate to state his views. Since he recently held a fast to protest the washout of the Parliament session, accepting the challenge will be an opportunity to set the record straight and respond to the rising criticism against his government. Two debates a year, will take only a couple of hours and won’t eat into the schedule of the PM. If indeed he is hard-pressed for time, the PM can allocate the time he spares for one of his “Mann ki Baat” programmes. Let’s hope the PM accepts the challenge.