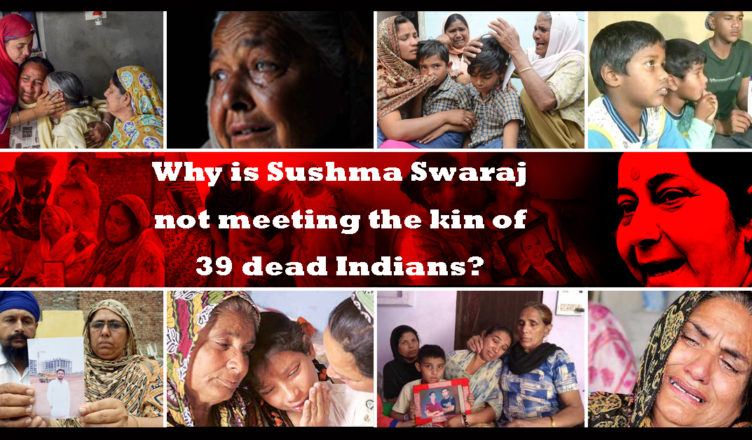 Even after 4 days of announcement made by External Affairs Minister Sushma Swaraj regarding the death of 39 Indians in Iraq’s Mosul, she has not been able to take out time to meet the victims’ families. Reportedly, the minister has refused to meet the mourning families. Gurpinder Kaur, whose brother Manjinder Singh is among those dead, said she had called Swaraj’s office day before yesterday to sough an appointment with her. The next day she received a call from the office by a person, who identified himself as Vijay Dwivedi and said that Swaraj was busy in making arrangements to bring back the mortal remains of the dead Indians and that she would meet them once it was done.

Gurpinder also revealed that she has made four phone calls to Swaraj’s office over the last seven months, but the minister’s office never got back to them. She had also written to Prime Minister Narendra Modi, Union Finance Minister Arun Jaitley, Union Home Minister Rajnath Singh and senior government officials over the last four years, but to no avail. How unfortunate is to see a government which is so apathetic towards its own citizens.

Gurpinder further said that if the families are not allowed to meet the External Affairs Minister till Saturday, they would come to New Delhi and sit on an indefinite dharna in Jantar Mantar from March 26 (Monday). Gurpinder is spearheading the struggle of the families of the 39 dead Indians. She further asserted that they would not even accept the mortal remains until Sushma Swaraj meets them and accepts their demands.

Also read: BJP leaves 39 Indians to die in Iraq and plays with their families’ emotions

Few other demands have also been put forward by Gurpinder, such as government job for at least one member of each family and financial compensation, and an establishment that the mortal remains are indeed of their relatives.

First, you hide such an explosive thing (about the death of 39 Indians) from their families and the entire country, and then you don’t even bother to meet them to address their grievances. Such selfish and indifferent government is ruling us.

One thought on “Why is Sushma Swaraj not meeting the kin of 39 dead Indians?”