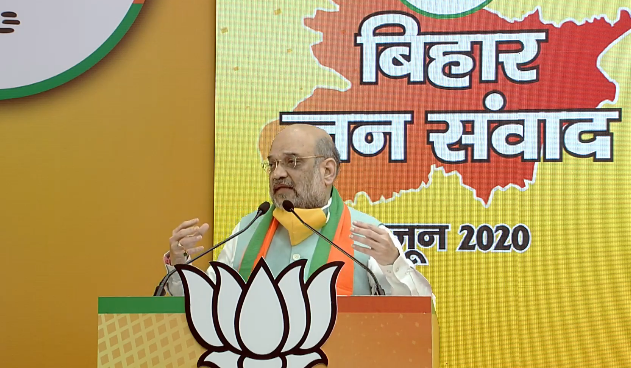 Holding a virtual rally, which he claimed wasn’t an election rally, the Home Minster stated that the NDA will return to power in Bihar—even predicting that it will get a 2/3rd majority. Adding to the contradictions, he also stated that the rally was to ‘connect with the people’ in times of difficulties. However, rather than listening to people’s problems and providing solutions, he took jibes at the Congress party. If it really wasn’t an election rally, why did he verbally attack the opposition?

Shah claims that he and the BJP believe in democracy. Yet, on crucial indicators such as the press freedom index and the democracy index India has plummeted after the BJP came to power. No where in the world is there a head of government who refuses to take questions from the opposition and the free press.

Amit Shah knows well that responding to the questions from the free press or the opposition means the BJP will have to answer why India is fast becoming one of the worst hit nations in the pandemic. After all, his rally was meant to be about the Covid-19 crisis. So why did he not have answers for his government’s lax administration? While millions of lives are at risk and the economy is on the verge of collapse, all that the Home Minister was concerned about was an election rally.

The Covid-19 did not impact India abruptly. There were ample cautions provided by several agencies. Even the Congress party had cautioned the government as early as February. Yet, the intelligence agencies which fall under the ministry of Home Affairs was not able to convince the government to take necessary precautions. As a result, we have become a susceptible country with our future in jeopardy. The government’s ignorance and arrogance has weakened and continues to weaken India. As the Home Minister, he must take responsibility for the massive intelligence failure.

The biggest fears that Amit Shah and Narendra Modi have is having to respond to public questions. Which is why, despite making emotional appeals to the country via video messages during the BJP inflicted demonetization crisis, Narendra Modi who claimed he is ready to be questioned at any cross roads of India has never kept his word. Not only has he never appeared at any cross roads of India, he has taken India to the cross roads.

In reality, both Narendra Modi and Amit Shah are fearful people, which is why the pliant media projects them as fearsome. They want people to be bullied into not questioning them for their failures and for damaging India culturally and socioeconomically. It is therefore the duty of every patriotic Indian citizen who puts India first to question the government on why we have been let down. As citizens we must seek answers and make them explain why India is becoming weak under them. From the public health crisis to the economic crisis, from the crisis on our borders to the crisis of conscience this government suffers from—there are questions galore.

Do not fear posing these questions to them or to their followers who are notorious for being abusive and uncouth on the social media. This is our duty as Indians. We can’t allow our fears to prevent us from performing our duties as Indian citizens. In any case, the fear Amit Shah has about being questioned by the people is more than the fearsome image crafted around him. #DaroMat