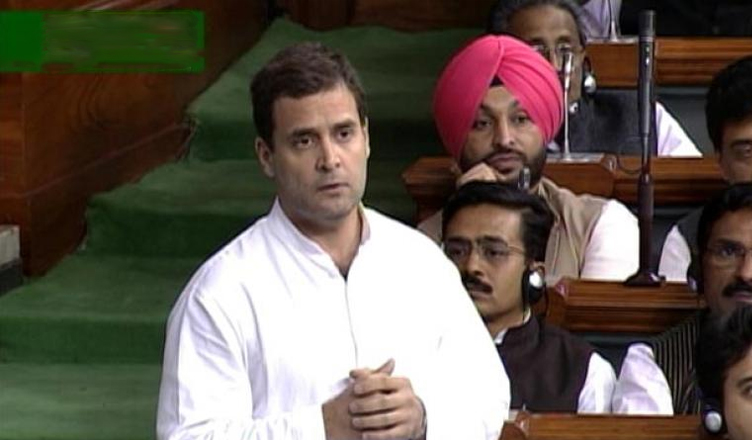 While speaking in the Lok Sabha on Thursday, Congress leader Rahul Gandhi slammed the government for their “shameful double-standard” when dealing with farmers on one hand and corporates on the other.

Raising the issue of farm crisis across the country, Gandhi talked about the recent spate of farmer suicides in Kerala, specifically in Wayanad, the constituency represented by him.

“I would like to draw the attention of the government to the terrible plight of farmers in Kerala. It hurts me to inform this House that just yesterday, a farmer in Wayanad committed suicide due to his crushing death. In Wayanad alone, bank notices for non-payment of loans have been given to almost 8,000 farmers. They are facing the threat of immediate eviction,” Gandhi said.

“Under the SARFESI Act, their properties are attached against their bank loans. This is resulting in a spate of farmer suicides. In Kerala, 18 farmers have committed suicides since banks began recovery procedures one and a half years ago,” he added.

The former Congress President further informed the House that the Kerala government has announced a moratorium on repayment of farm loans for all Kerala farmers till December 31, 2019, but the Government of India is refusing to direct the RBI (Reserve Bank of India) to consider this moratorium and get it implemented.

“In the last 5 years, the BJP government gave 4.3 lakh crores in tax concessions and waived 5.5 lakh crores for rich businessmen. Why is this shameful double-standard? Why does the government act as if our farmers are inferior to the rich,” Gandhi said.

“I was sad to see that no concrete step was taken in this budget to provide relief to farmers,” he added.

He then appealed to the government to direct the RBI to consider the moratorium declared by the Kerala government and ensure that the banks don’t threaten the farmers with recovery notices.

“The Prime Minister has made commitments to the farmers of this country on prices, farm loans and other issues. So, I would request the government of India to fulfil these commitments,” Gandhi said as he concluded his address.

Listen to his address here:

2 thoughts on “Why does govt act as if farmers are inferior to rich? questions Rahul Gandhi in Lok Sabha”