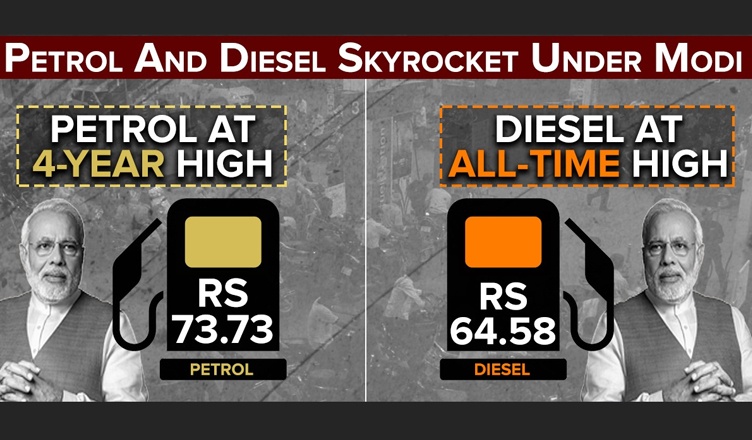 We really wish that the news of petrol and diesel prices being four-year high and all-time high respectively was only a cruel April Fool’s day joke, but alas, it is a bitter truth which we all have to live with. What is even worse, the prices went up further on Monday. In Delhi, where Petrol retailed at Rs. 73.83 per litre, Diesel retailed at Rs. 64.69 per litre. Yesterday, Petrol and Diesel were retailed at Rs. 73.73 and Rs. 64.58 respectively. While the Petrol price hit four-year high, the Diesel price hit an all-time high.

In other metro cities, like Kolkata, Mumbai and Chennai, the Petrol price as on today is Rs. 76.54, Rs. 81.69 and Rs. 76.59 respectively. Similarly, the Diesel price in all the three cities is Rs. 67.38, Rs. 68.89 and Rs. 68.24. A year will be completed in June this year of discarding the 15-year old practice of revising rates on the 1st and 16th of every month. Instead, State-owned oil companies — Indian Oil Corporation, Bharat Petroleum Corporation and Hindustan Petroleum Corporation adopted a daily price revision system.

What shows inefficiency of this government is to unable to provide fuel to the common man at cheaper prices at a time when the global crude prices dipped. As compared to 2013, the global crude prices have been lower in these years. Despite this, the BJP government has not provided any relief to the common man. On the contrary, it has only added unnecessary taxes to the fuel prices, taking them to a high level and filling their coffers with the extra money extracted from us.

Prime Minister Modi has proven that he is not the country’s ‘Pradhan Sevak’.