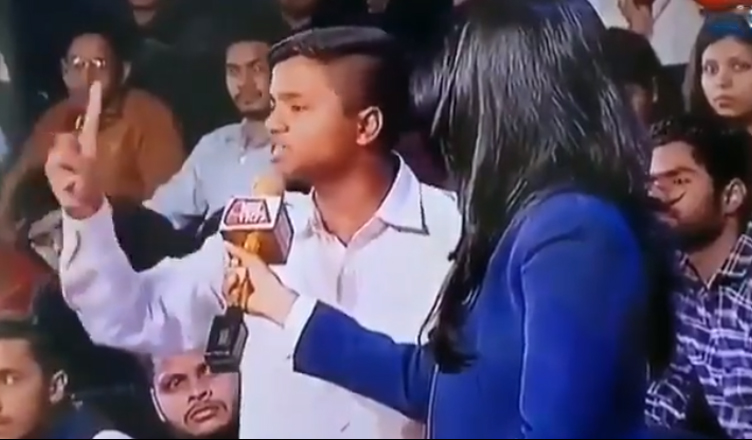 A video clip of a young man criticising Prime Minister Narendra Modi for failing to turn his words into actions is going viral on social media.

On a debate show named ‘Takkar’ broadcast by Aaj Tak, a young man slammed Prime Minister Narendra Modi for making absurd statements such as ‘sell pakodas’ or ‘be a chowkidar’ and says that the country needs en efficient Prime Minister and not a chowkidar.

“At one time you tell the youth to sell pakodas, and at others you talk about Chowkidar. We can get a Chowkidar from Nepal. But the country needs an effective Prime Minister, not a Chowkidar,” the man can be heard saying in the video.

The young man also attacked the Prime Minister for a statement he makes quite often about the country not achieving anything in last seventy years.

A Twitter user shared the viral video from his account along with the caption, “In just 26 seconds, this guy has exposed @narendramodi on his failure to create jobs, called out his Chowkidaar gimmick and reminded Modi that he is a PM, asked him to stop lying that Congress hasn’t done anything for the country. Wow! Must watch and RT.”

In just 26 seconds, this guy has exposed @narendramodi on his failure to create jobs, called out his Chowkidaar gimmick and reminded Modi that he is a PM, asked him to stop lying that Congress hasn't done anything for the country.

Wow! Must watch and RT pic.twitter.com/uOhBUyA2US

Within hours of PM Modi launching his #MaiBhiChowkidar campaign using his self-designated “chowkidar” status and saying that everyone who was against social evils and fighting corruption was a “chowkidar,” the hashtag backfired.

Why? It turned out that the BJP was using bots to promote its hashtag.

Also read: Allow me to kill myself: Debt-ridden farmer demands euthanasia as he returns Rs 2,000 received under PM-KISAN

Even the accounts with names such @niiravmodi, @NehruKiGaltiHai, @ModiLeDubega were being replied the Prime Minister’s account, which otherwise, should actually have been blocked (since they were named in such a way so as to mock the Prime Minister). But since, bots were at work, the same message was sent to everybody irrespective of anything.

Even the Congress could not stop itself from taking a dig at the BJP.

We’re sorry your campaign backfired. We sympathise with your pain & frustration. Maybe you should make an effort to be real than rely on bots 🙂
Feel hugged ?
Love,
From the party that fought for your freedom

“It’s great to see that Modi is still in touch with his buddies. #ChowkidarChorHai,” The Congress wrote in another tweet along with a couple of pictures showing the PM’s reply to such accounts.

It’s great to see that Modi is still in touch with his buddies. #ChowkidarChorHai pic.twitter.com/191BinitIb

Embarrassed by the way hashtag was flipped to target the PM himself, the BJP IT cell had to shut their bot.