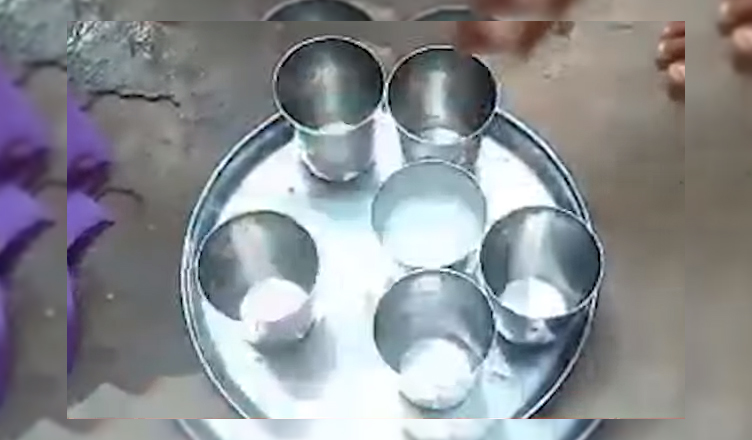 Uttar Pradesh is in news for yet another mid-day meal muddle. A video from Uttar Pradesh’s Sonbhadra is doing the rounds on the internet in which a cook of the government’s flagship nutrient programme can be seen diluting a packing of one-litre milk with a bucket of water to serve some 81 students at a government primary school there.

The school at Sonbhadra district’s Chopan has 171 students, of whom 81 turned up at the school on Wednesday when the incident took place. In the video, the students can be seen bringing their glasses turn by turn and getting half-a-glass of the diluted milk.

The incident comes to light a week after Human Resource Development Minister Ramesh Pokhriyal Nishank told the Lok Sabha that the highest number of complaints over mid-day meal came from Uttar Pradesh. of 52 cases reported across the country, 14 were from Uttar Pradesh.

The district administration said that there was enough milk in the school and it was later distributed to the students. However, the cook who is seen in the video distributing milk told NDTV, “I diluted one litre of milk with a bucket of water. We were only given a packet of milk yesterday, so that’s what I had to do”.

In August, two similar incidents were reported from the state.

Students at a government school in Mirzapur district were served chapatis along with salt and no vegetable or dal.

In another incident, as many as 26 students of a government primary school in Bahlolpur area of Shahjahanpur district fell ill after consuming mid-day meal served at the school on August 28.

“The incident occurred at Bahlolpur Primary School where the mid-day meal was prepared for the students. The students — a total 45 — ate tehri and drank milk given to them as part of the meal. After the students returned to their homes, they started complaining of vomiting and stomach pain. They were then rushed to the local CHC through ambulance. The condition of all the students is fine and all of them have been discharged,” The Indian Express quoted District Magistrate of Shahjahanpur Indra Vikram Singh, as saying.

One thought on “Watch: UP school students served milk or water?”