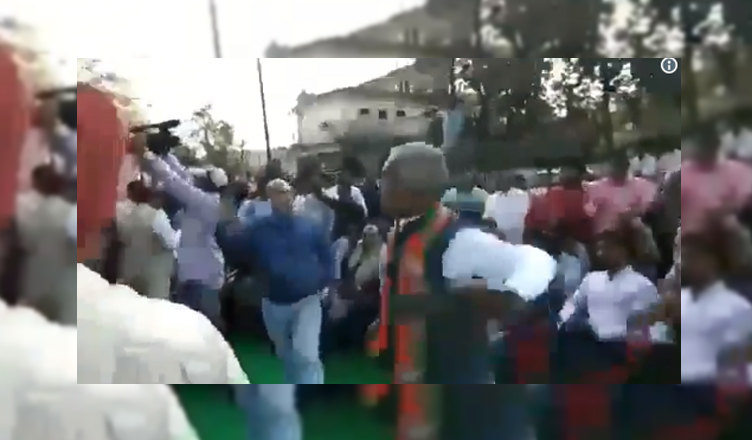 In a video that has now gone viral on social media, Bharatiya Janata Party (BJP) leader and Saharanpur district president Vijendra Kashyap can be seen attempting to hit a farmers’ leader with his shoe on Thursday.

According to Jansatta, Kashyap claimed that sugar mills in Uttar Pradesh had paid about 60 per cent of sugarcane farmers’ pending dues as a result of pressure from the Yogi Adityanath government in the state. The BJP district president made the comment during a debate organised by a local news channel in Saharanpur.

“I have the sugarcane department’s data with me. According to this, in the last two years, only 15 per cent of the dues have been paid to sugarcane farmers,” News Central 24×7 quoted Rana as saying.

Upon hearing this, Kashyap lost his cool and stood up from his chair in an attempt to hit Rana with his shoe.

However, other saffron party workers present at the event intervened and held Kashyap back.

A visibly angry Saharanpur BJP dist president Vijendra Kashyap tried to attack opposition with shoe during a TV show debate. People at the spot intervened to calm down Kashyap. pic.twitter.com/1VgeGhStVT

Earlier in March, a BJP MP hit a BJP MLA with his shoes after a fight erupted between the two over seeking credit for a new road.

The video showed BJP MP Sharad Tripathi getting angry at MLA Rakesh Singh because his name was missing from the foundation stone for a local road.

The duo along with other party members were attending a meeting of District Planning Committee in the Collectorate Auditorium at Sant Kabir Nagar, nearly 200 km from Lucknow, when the scuffle broke out.

Watch the video of their scuffle here: