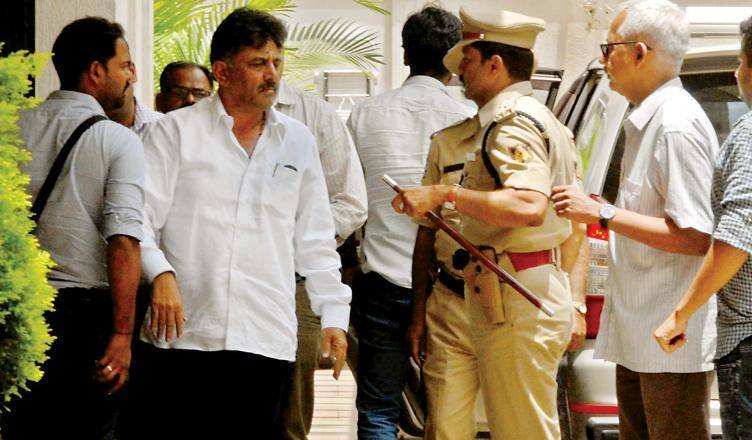 The CBI raided houses and offices of people linked to Karnataka Congress MLA DK Shivakumar and his brother a Congress MP, DK Suresh. These raids are being done on charges of illegal exchange of demonetised notes. Shivakumar has accused the CBI of acting on the BJP’s orders carrying out this ‘vindictive act’ to frame them.

The CBI claims these raids are being conducted on the charge that Chief Manager of Corporation Bank, B Prakash with unidentified others illegally exchanged Rs. 10 lakhs of demonetised currency notes on 14th November 2016. They are also suspected of covering this up by fabricating requisition slips. The investigation agency has stated that the case against Prakash and others was registered on the 7th of April, 2017. Congress MP Suresh said that a special CBI court had issued warrants against 11 people including him and his brother.

“Main targets are me and my brother DK Shivakumar and nobody else. By targeting others, they are trying to reach us. I have no idea who these 11 people are,” said Suresh. He said he is ready for legal recourse against the “vindictive action. We have been targeted by BJP, Amit Shah, and Narendra Modi. They have given a clear instruction to central officials of the CBI, I-T, and ED. Some sources told us that they all had a meeting 3-4 weeks ago. Through some messengers we got the information,” Suresh said.

Shivakumar has said that they will not bend under pressure and threats, adding that, “Officials under BJP rule should not forget this phase is not going to be permanent and nobody is immortal. Neither is anybody going to remain in power forever, nor your powers will be permanent. You have been given powers for a while. So do not act as a puppet in somebody’s hand to trouble others.”

One thought on “Vindictive BJP is using CBI to target us: Congress’ DK Shivakumar and DK Suresh”