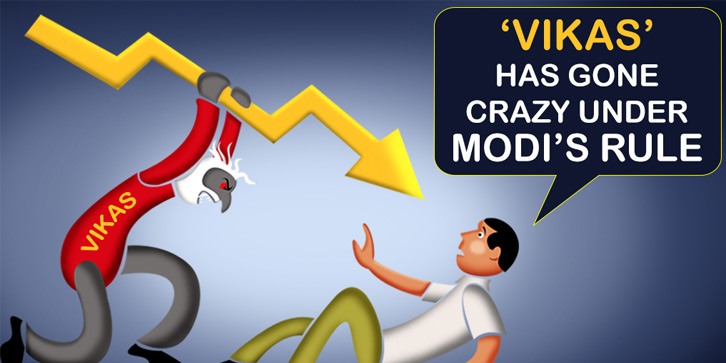 Yes, even we thought Vikas is a person who has, may be, lost his mental stability.

Thousands of netizens on Twitter and Facebook, seen for the past whole week, expressed concern towards ‘Vikas’, got us wondering who this ‘Vikas’ really is. A series of tweets under the hashtag #VikasGandoThayoChe, which means Vikas has gone crazy in Gujarati, revealed that ‘Vikas’ is not an actual person. One netizen wrote, “Vikas has gone crazy in India and especially Gujarat under Modi and BJP rule”, with a pre-2014 and post-2014 comparison chart of fuel prices. This satirical take on the assessment of ‘Development’ under Modi-rule along with factual data unearths the undeniable truth behind BJP’s flawed agenda of development.

Be it agriculture, skill development, health, education sector or the manufacturing sector, everything has reflected on the poor state of development.

Additionally, failure of demonetisation and ill-conceived GST has shrunk the GDP growth further to 5.7%, as the government data reports.

The social media campaign, with the hashtag #VikasGandoThayoChe, started by a Congress volunteer, instantly gained countrywide momentum with the campaign being carried out in different languages with hashtags #VikasGoneCrazy, #VikasPagalHoGayaHai. Maharashtra recently started another variant of this campaign questioning “Where has Vikas gone?”.

With the increase in the participation of common people in this social media campaign, we infer that people have come to surmise that ‘Development’ under BJP’s governance has sunken to a mere rhetoric.