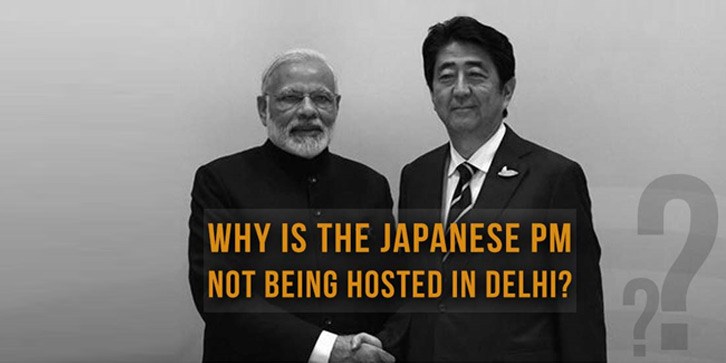 Japanese Prime Minister Shinzo Abe’s recent visit to India was more of a state visit than a nation visit. Abe landed in Gujarat and his two-day visit was made to be devoted to only Gujarat. It is rare for foreign dignitaries to spend their visits to India entirely in a regional capital and not New Delhi.

If we get deep into it, this move can be seen as BJP’s desperation to focus on optics ahead of the Assembly polls.

It is important to mention that the Prime Minister hosted his Japanese counterpart in Ahmedabad to prematurely unveil a bullet train project before elections in Gujarat. However, during Mr Abe’s 2013 visit, he and the then PM Dr. Manmohan Singh signed a Joint State Agreement to develop its first-ever high-speed-rail corridor in India. The present regime’s attempt to appropriate an already in-the-works Bullet Train Project is just another example of unstatesmanlike behaviour by Mr Modi.

Modi, misused his position in order to favour a particular state, Gujarat, of which he was the CM for many years. The September timing of the ceremonial inauguration is clearly aimed to a get a jump on the model code of conduct that the Election Commission of India enforces during the campaign period ahead of polls.

Since Gujarat will see the polls in the coming months, PM taking Shinzo Abe to the state seems part of the BJP’s poll efforts than any meaningful engagement with a major world power. This is a rare moment in Indian politics when a prime minister is using a state visit by another prime minister to help his party in polls to a state assembly.

Along with gaining brownie points ahead of the Gujarat polls, this is government’s way of distracting attention of citizens who are struggling from rocketing fuel prices. It reveals how a Prime Minister has no compunctions to misuse his constitutional position and divert all the benefits coming out of an international treaty to his own home state.