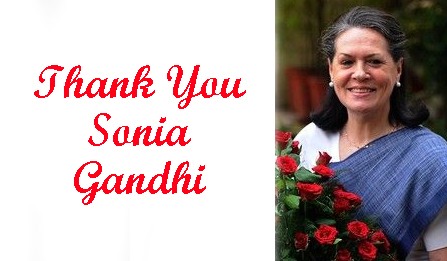 As one of the strongest women leaders Sonia Gandhi officially retires from the post of Congress President today, the Twitterati has taken out its own innovative way of thanking selfless leader for devoting the 19 years of her life to the party and to this country.

The hashtag #ThankYouSoniaGandhi is trending on Twitter and is flooded by the tweets of tweeple expressing their love and respect for the former Congress President.

There were a host of tweets thanking Sonia Gandhi and applauding her for her relentless service. Some of them are:

I would like to express my gratitude towards the most charismatic leader #SoniaGandhi ji for her immense dedication, honesty & fearless leadership for the party & the nation #ThankYouSoniaGandhi with all the love & warmth wishing for your long&healthy life @INCIndia @OfficeOfRG pic.twitter.com/Y4lnsQI01r

#ThankYouSoniaGandhi for the devotion & sacrifices you’ve made for the country while relentlessly fighting for uplifting the needy & the weak. pic.twitter.com/pJWXhL9ZF2

Best wishes to Rahul Gandhiji as he takes charge of @INCIndia today, Congress party will continue to reflect the voice & aspiration of people under his able leadership! #CongressPresidentRahulGandhi #ThankYouSoniaGandhi ji for your selflessly service to the nation & the party! pic.twitter.com/fXAyxxl6bX

Thank You SoniaJi for your dedicated service to the party and the Nation. #ThankyouSoniaGandhi pic.twitter.com/HN1gZ0KCTi

Historic day today for @INCIndia! Passing of the baton. Old makes way for the new. #ThankYouSoniaGandhi for your stellar stewardship. Congratulations to new #CongressPresidentRahulGandhi ?

Sonia Gandhi never intended to be a politician in her early life.
She took over Congress during one of its weakest phases.
She took the party to great heights with compassion and competence fuelled by the fire of fulfilling her late husband’s dream.#ThankYouSoniaGandhi

Take a walk down memory lane with us as we revisit Smt. Sonia Gandhi’s journey in the Congress Party and say #ThankYouSoniaGandhi for her years of guidance, service and commitment to the Party and the country. #CongressPresidentRahulGandhi pic.twitter.com/BxaFKNHle0

Congratulations and best wishes to #CongressPresidentRahulGandhi. We look forward to working under your leadership. #ThankYouSoniaGandhi for your selfless service for the party & country. You are an inspiration!

While these are only a handful of tweets, the Twitter is flooding with similar messages and the hashtag has already been trending since long.

Sonia Gandhi is the woman who took control of the reins of the Congress Party just after her husband Rajiv Gandhi’s assassination and despite threats to her life, she continued to lead the party fearlessly.

In an effort to revive the party’s sagging fortunes after their electoral defeat in 1996, she joined the Congress Party as a primary member in the Calcutta Plenary Session in 1997.

In order to end internal factionalism and with growing demand within the Congress, she was finally chosen as the President of the Congress in 1998.

Being a single woman in an overwhelmingly male-chauvinist political environment, she continuously fought sexist barbs and attitudes.

This only made her stronger.

She led the revival of the party and the Congress-led UPA defeated the incumbent NDA government despite Atal Bihari Vajpayee’s, India Shining Campaign in the 2004 General Elections.

She was the unanimous choice to become Prime Minister in 2004 but instead chose Manmohan Singh for the post.

As chairperson of the National Advisory Committee, she played an important role in making the National Rural Employment Guarantee Scheme and the Right to Information Act into law.

Under her leadership, the Congress-led UPA was re-elected into power in 2009 with a decisive majority.

She once again, relinquished the post of the Prime Minister. Nothing or no one could have stopped her.

In August 2011, she underwent successful surgery for cervical cancer but still continued to lead the party with distinction, dedication and passion.

All her life she has faced a vicious and malicious propaganda campaign against her by the RSS and the BJP – from questioning her nationality to abuses to involvement in baseless scandals and corruption.

She has always stood for and fought for the idea of India as defined by the Constitution – an India which is a liberal, secular and progressive democracy.

She is more Indian than the people who rule India today and bleed its people and Constitution to Death.

She might be Italian by birth, but she is true India by Karma.

#ThankYouSoniaGandhi for guiding the Congress Party and India tirelessly throughout.

Listen to Sonia Gandhi’s emotional speech as she hands over the baton of Congress Presidentship to Rahul Gandhi: