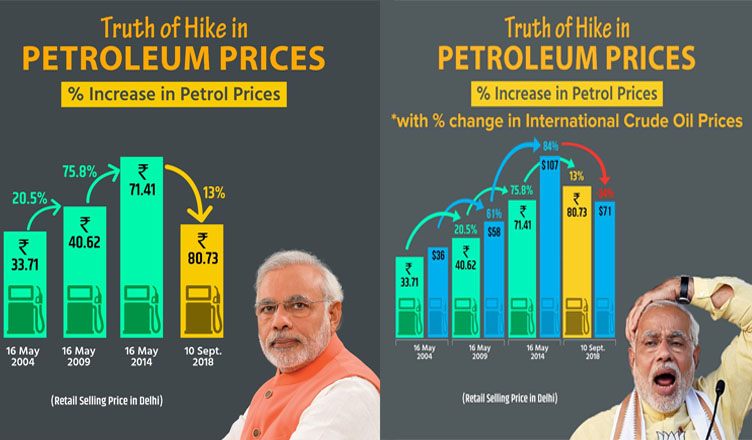 The Bharatiya Janata Party (BJP), yesterday, tweeted two infographics, on petrol and diesel retail selling prices in Delhi and captioned it as ‘Truth of Hike in Petroleum Prices.’

The rate at which petrol prices have surged has increased by 13 percent between 2014 and 2018, which is lesser than the rate when compared to the jump between 2009 to 2014 at 75.8 percent. BJP’s goof-up moment was, when instead of clearly depicting the drop in ‘rate’, it showed a drop in absolute ‘prices’.

Similarly, in the graph on diesel prices, the BJP has again indicated a decrease in the hike percentage from 2014 to 2018 by showing a drop in the price bar – when in reality, diesel prices have risen to Rs 72.83 from Rs 56.71.

Also read: Bharat Bandh: Together, all of us are going to defeat BJP, says Rahul Gandhi

Congress was quick enough to grab the opportunity and within an hour, it “fixed” the BJP’s faulty graph.

Well, even netizens didn’t spare the BJP for this gaffe of theirs and told them the ‘truth’ in their own humorous ways.

This is perfect graph. pic.twitter.com/ahLHax8Pjm

Aha so finally we have

Hope this clears all the confusion. pic.twitter.com/FIdzPGOlPO

I have fixed it further pic.twitter.com/uUZFh7tbDx

I am sure a student of "entire economics" must have made this graph! pic.twitter.com/ftPIZoVvQg

You get an F in math, F in statistics, F in graphics, but A in imagination and A+ in fiction. https://t.co/4WC8fuaZ3i

It just hit me. This graph explains why BJP thinks Rafale was a great deal! pic.twitter.com/sOv1oViISH