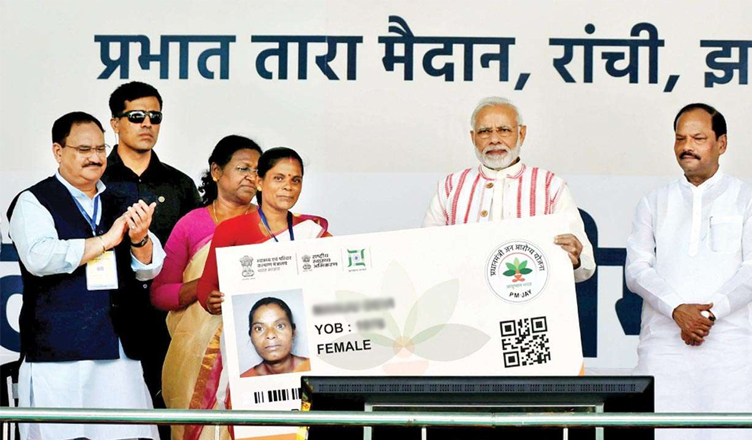 Prime Minister Narendra Modi launched the Pradhan Mantri Jan Arogya Abhiyan, popularly known as Ayushman Bharat on September 25, which marked the birth anniversary of Pandit Deendayal Upadhyay, while claiming that the scheme was going to be a game-changer in the lives of the poor and needy,

PM Modi also declared the scheme as the world’s largest healthcare initiative and claimed that it would serve as many people as total population of 27-28 European countries. “The beneficiaries are almost equal to the population of Canada, Mexico and US put together,” PM Modi had announced.

As per a report by National Herald, the healthcare scheme fails to stand true to the claims as made by the Prime Minister. Neither is it the world’s biggest healthcare scheme nor it is a very effective scheme. On the contrary, it opens up new ways for corruption.

National Herald has list seven points to prove its point made in the above paragraph:

It is not the Biggest ever healthcare scheme:

While PM Modi claimed that Ayushman Bharat is the biggest ever healthcare scheme, which will be covering 10.74 crore families by providing services amounting up to Rs. 5 lakh per individual, he conveniently forgot to mention that at the time of the launch various states had been running their own healthcare schemes which cover much more population and are effective as well.

While talking about the scheme, PM Modi once again brought up the slogan that the BJP used in the run up to the 2014 Lok Sabha elections, ‘Sabka Saath Sabka Vikas’, while accusing the previous UPA government of corruption.

However, we would like to bring to your notice that Modi Government has roped in a German company as a consultant for Ayushman Bharat.

German company, GIZ has a tainted past. National Herald quoted a source as saying that Nishant Jain, who is considered very close to Dinesh Arora, deputy chief executive officer of Ayushman Bharat, has allegedly favoured the lobby groups by framing the scheme in a manner that favoured the stakeholders.

What would Mr Modi say about corruption now?

Use of old data to cut the number of beneficiaries:

The data which has been used for conceptualising Ayushman Bharat is seven years old and is based on the last Socio Economic and Caste Census which took place in 2011.

Apart from that, the task of verifying the number of people fulfilling the criteria to be eligible under the deprivation list remains pending.

According to National Herald sources, the scheme benefits would be provided to those who still qualify under the deprivation list, seven years after it was published, whereas the families which no longer fit the criteria would be excluded.

Modi government claimed to have appointed Third Party Administrators (TPAs) to smoothen the process of implementation of the scheme, but according to National Herald sources, those who have been appointed as TPAs are people who are close to BJP-RSS and that they are paid for processing claims even if they are false.

Too many chances given to corrupt hospitals, if any:

According to National Herald, under Ayushaman Bharat, de-empanelling a hospital has been made so serious difficult that even if a hospital is indulged in large-scale corruption, it would be difficult to debar it.

Under the scheme, fraud has been classified into five categories and a hospital would be debarred if a fraud is committed by it thrice in a single category. So, basically it would not be referred to a committee to be heard in a corruption case unless it has committed the fraud at least 10 times.

Cash incentives may have opposite impact:

Under the scheme, the doctors in government hospitals would get cash incentives for surgeries but this might increase the chances of doctors conducting surgeries in those cases also where it is not required.

Since no claims would be verified or denied under the trust model, adopted by the Modi Government for the scheme, there is huge scope for diverting public funds to BJP’s coffers.