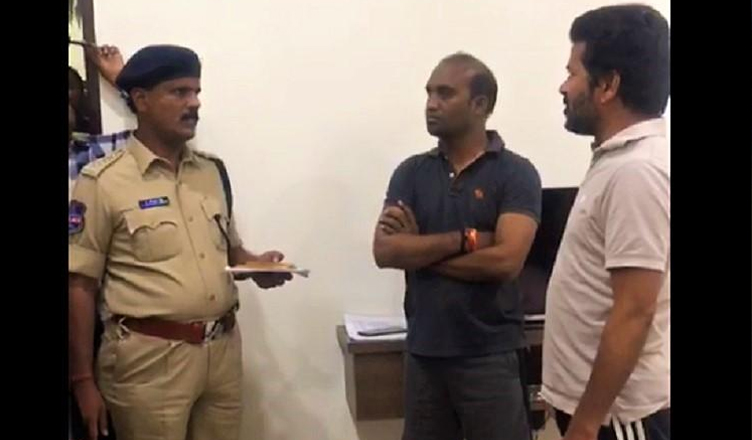 India may have attained freedom at the stroke of the midnight hour, but a few hours later, at around 3 am, the freedoms have been curtailed.

India woke up to dramatic visuals of the working president of the Congress party in Telangana being arrested at about 3 am. The police seemed to have broken the door and barged into the house of the popular Congress leader, Revanth Reddy and whisked him away to an undisclosed location. That a sitting MLA is dragged away by the police in the dead of night a few days before the elections should worry every Indian citizen. The police have also implemented section 144, which prohibits the assembly of four or more persons in order to prevent any disturbance of peace.

It must be recalled that last week, the general secretary of the ruling TRS party, Sreenivas Reddy had complained to the Telangana CEO, Rajat Kumar and claimed that Revanth Reddy was planning to disrupt the December 4th public meeting to be addressed by the chief minister K. Chandrasekhar Rao, at Kodangal constituency. Revanth Reddy is the sitting MLA of the Kodangal constituency and had called for the boycott of the public meeting.

The Telangana police have claimed that Revanth Reddy has been arrested as a preventive measure and will be released after chief minister KCR’s public meeting concludes. However, the police have not submitted any evidence of any unlawful activities committed or planned by Revanth Reddy or his followers. The arrest therefore is a blatant attack on civil liberties.

In a democracy, it is the right of the people to protest and so long as the protests are peaceful and do not breach any law, the police must refrain from arresting or detaining anyone. Moreover, why must not people protest and seek answers from the government? KCR has not explained convincingly why he dissolved the assembly well before the end of his government’s term and many people feel that he has taken the people’s mandate for granted.

Perhaps KCR misread the people’s mood and erred in calling for early elections. As people began questioning TRS leaders as they went to campaign, the leadership became nervous. In scores of villages and small towns, people have stopped TRS leaders from campaigning and began questioning them about the promises that were broken. In fact, last week KCR too faced uncomfortable questions from a youth as he addressed a public meeting in the town of Kagaznagar. Unable to answer why he could not keep his electoral promises, KCR publically lambasted the youth and spoke disparagingly about him, calling him an opportunist drunkard.

As the state goes to the polls on December 7th, the TRS leadership is increasingly becoming nervous. KCR may have been perturbed by the incident at Kagaznagar and resorted to such undemocratic actions against the opposition. Last week, Vanteru Pratap Reddy, the Congress contestant against KCR in his home constituency of Gajwel was raided. In videos that were shared on the social media, Pratap Reddy is seen questioning the police on what grounds his house was being raided in the dead of night. It has become common to arrest or harass political opponents during elections with impunity because the actions of those with an authoritarian streak go unquestioned.

In this context it is important to remember the words of the popular English writer and newspaper columnist, A. N. Wilson—“It is remarkable how easily children and grown-ups adapt to living in a dictatorship organized by lunatics”.  If we do not condemn such brazen assaults on our civil liberties, we risk normalizing them and our democracy will give way to an authoritarian regime.