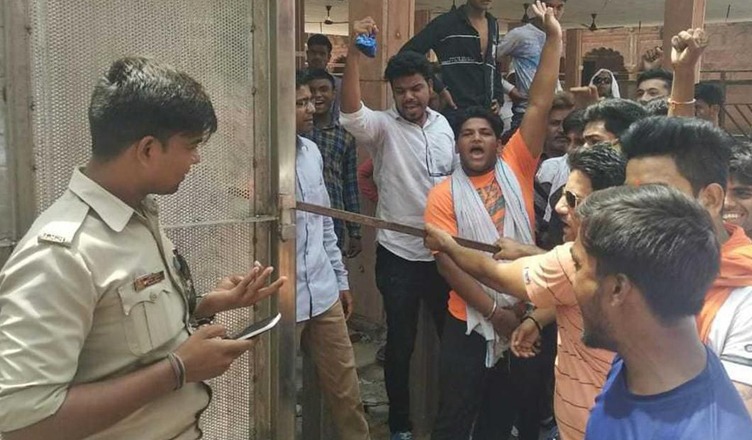 A group of Vishwa Hindu Parishad (VHP) members tried to vandalise the west gate of Taj Mahal. The reason stated by them behind taking such action is that the gate was blocking the way to a 400-year-old Shiva temple while constructing a closed area for the Taj Mahal. Ruckus was witnessed when a group of 20-25 people, armed with iron rods visited Taj Mahal’s west gate on Sunday and started shouting religious slogans.

They were protesting against Archaeological Survey of India’s decision to block one of the routes which leads to a 400-year-old temple. The VHP members allegedly removed a 10X11 ft. steel gate which was installed by the ASI to block the access to the temple.

In spite of there being an optional path to the Siddheshwar Mahadev Temple on the Basai Ghat, the right-wing members indulged in vandalism only to prove once again their characteristic trait of being goondas and hooligans.

A video footage of the incident shows the right wing members trying to vandalise the western gate with iron rods and hammers in their hands.

Also read: Why were Muslims near the temple: Uttarakhand BJP MLA Rajkumar Thukral

“On Sunday around 25-30 activists from the VHP came near the western gate of the Taj Mahal and started vandalizing the newly installed turnstile gate for ticket collection for Taj Mahal and Saheli ka Burj. The protesters had hammers and iron rods with them. They removed the gate and threw it some around 50 metres from there. Soon the Taj safety police team reached there and stopped them from vandalising more property,” The Indian Express quoted Taj Safety circle officer (CO) Prabhat Kumar as saying.

The right-wing organisation is known to be violent and intolerant. Anything which slightly goes against their religion, even if it is not harming any sentiments, these people start acting like hooligans and take law into their hands. Yogi Adityanath-led BJP government in the state should look into the matter and ensure the guilty are brought to book.