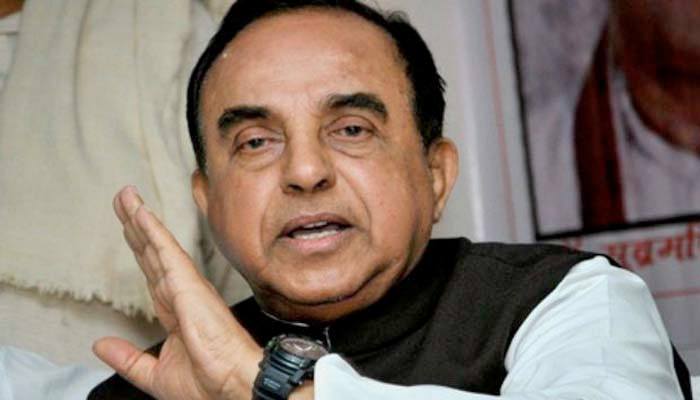 The truth about propaganda is if you repeat it long enough, it shall one day be accepted as the gospel truth. This truism was recently proved true all over again, by Subramanian Swamy, Rajya Sabha MP and a Former Union Minister. Not surprisingly, he is a part of the BJP’s National Executive.

Since Swamy is given to filing scores of petitions in courts, we assume he has immense respect for the established judicial processes of the country. Yet, Swamy’s reaction to the conviction of fake godman Gurmeet Ram Rahim Insan in a rape and criminal intimidation case, is baffling. The Punjab & Haryana HC’s judgment was not enough to convince the conspiratorial and fertile mind of Swamy about Ram Rahim’s credentials.

First, he raised the well-worn bogey of “Hindu Saints under attack due to a systematic conspiracy” to defend the fake godman.

He tweeted: “A new threat to Sadhus: Politicians& ashramites wanting to grab Ashram wealth by sending the Swamijis to jail. Sadhus must groom successors”

“Kanchi Shankaracharya murder case, false cases against Baba Ramdev, Sri Sri, and the media cacophony to frame every virat Hindu is a threat,” he added. Knowing that Swamy is a hot-headed Hindutva fanatic, it is easy to not get surprised by the statements. Somehow, his faith in judicial processes takes a backseat when the Viraat Hindu in him takes over.

Even this may not have raised too many eyebrows, if Swamy would have stopped here. But he went even further, and exhibited online behaviour befitting the scores of mercenary trolls, that get paid per tweet, and have scant regard for fact The paradox is that Swamy is a Harvard University alumnus and not a troll.

This is the tweet in which Swamy showed complete disregard not for just any other court, but for the honourable Supreme Court of India: Does anybody remember Sukanya gang rape in Amethi on December 5, 2006?

For those of you who are regular on social media, this is a canard oft-repeated by trolls to discredit Rahul Gandhi, the Congress Vice President. On the behest of powerful forces, ex-Samajwadi Party MLA Kishore Samrite and other persons filed a petition against Rahul, alleging him of confining and raping a woman named Sukanya Devi in his constituency Amethi. Hearing the case, the Supreme Court in October, 2012 dismissed it summarily.

The SC said, “The alleged incident which, according to the petitioners, police and the CBI, never happened and illegal detention of the petitioners has been falsified by the petitioners themselves in the writ petitions. It is a matter of regret that the process of the court has been abused by unscrupulous litigants just to attain publicity and adversely affect the reputation of another politician, respondent No.6. (Rahul Gandhi).”

Not just that, the Court also slapped costs of Rs 10 lakh, including Rs 5 lakh on the ex-SP MLA. The court asked the CBI to carry out an investigation against the two for filing frivolous petitions, and wasting the court’s time.

Noting that the false Sukanya Devi petition had seriously harmed the reputation of Rahul Gandhi, the court awarded him Rs. 5 lakh compensation.

Much before the menace of fake news took the news and information industry by storm, Rahul Gandhi became the first victim of it. If one were to do a Google search of the false rape case filed against him, the first links appearing on Page 1 of the results would lead to dodgy, right wing extremist sites. the articles appearing have not an iota of truth in them, but still continue to be up on the internet, even five years after the judgment.

Taking cognizance of this, the SC judgment said, “In regard to the website, CBI stated that the three suspected websites were posted outside the geographical limits of our country and the originating IP address could not be traced and further investigation had to be stopped.”

The judgment even pointed out how the father of the purported victim did not support the rape and confinement allegations. He also informed the court that name of his wife and daughter were incorrectly mentioned as Smt. Sushila and Sukanya Devi.

The highest temple of justice in the country is not enough to satiate Swamy’s conspiratorial mind. To defend a convicted rapist, who ran a dark cult of sexual exploitation and mind control, Swamy must rely on old social media hoaxes, and canards. Tells you a lot about the man’s relevance in the current political scenario and his state of mind.