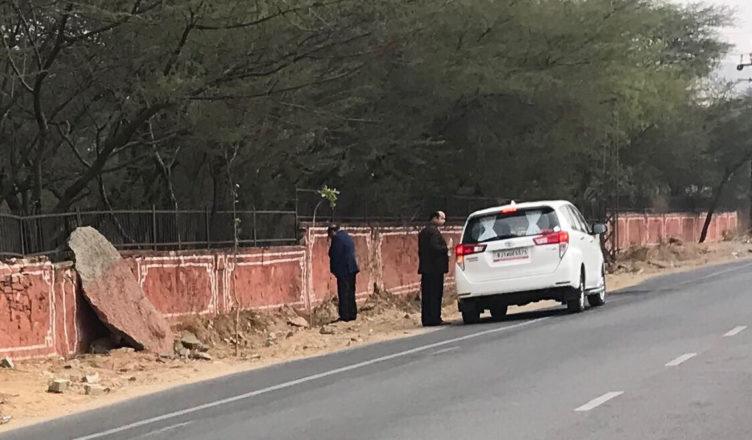 While Prime Minister Narendra Modi and the BJP is busy harping about the Swachh Bharat Abhiyan all over the world and encouraging the citizens to promote cleanliness, their own’s minister act has turned out to be a big embarrassment for them.

A picture of Rajasthan Health Minister, kalicharan Saraf, urinating on a wall in pink city Jaipur has gone viral on the social media.

Looks like, Saraf is a serial offender of this.

Earlier also, he did the same during the Dholpur by-polls.

Congress’ Rajasthan unit Vice President Archana Sharma told that the minister had done the same earlier during the Dholpur by-polls but she could not click a picture of the act then because of “poll stress”.

However, this does not seem to a “big issue” for the offender.

When the media reached out to the minister for his comment, he said he would rather not talk about it as it is “not a big issue”.

Congress’ Rajasthan unit Vice President Archana Sharma said by doing such “shameful” deeds, these ministers are only giving out a wrong message.

A picture of the same was tweeted out by secretary and coordinator of the IT cell of Rajasthan Congress Committee, Danish Abrar.

The picture has come out at a time when the Jaipur Municipal Corporation is putting in all its efforts to make the city top the list under the Swachh Bharat Abhiyan.

For the unversed, as per rules, those urinating on roads are asked to pay a fine of ₹200.