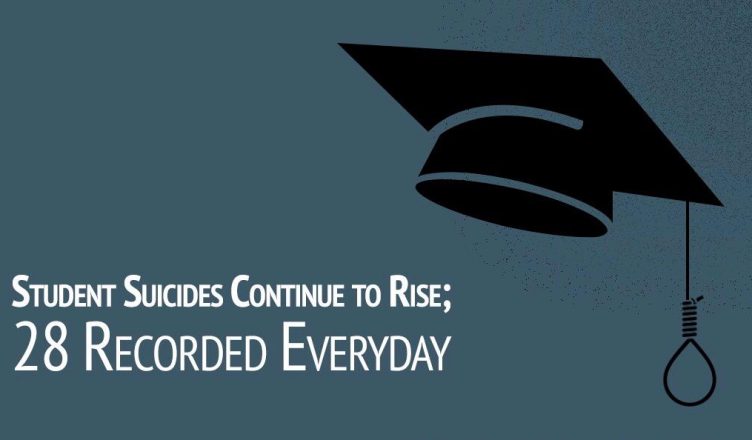 Data shows that a student commits suicide every hour in India, and has recorded and average of 28 such suicides reported every day. Maharashtra had the highest number of student suicides in 2018 with 1,448 — almost 4 suicides every day — followed by Tamil Nadu with 953 and Madhya Pradesh with 862.

Is the education system to blame?

Suicides in premier institutions like IITs have seen the maximum number of student suicides. According to the data from the Department of Higher Education, under the Ministry of Human Resource Development (MHRD), there have been 27 students across 10 IITs that have committed suicide between 2014 and 2019, with IIT at the top which saw the lives lost of seven students.

In April 2019, 19 students in Telangana committed suicide within a week of the State’s intermediate results. In 2018, 12 students ended their lives in a single day in Madhya Pradesh after the board exam’s results were announced.

Kota, known as a coaching centre hub, has been a witness of numerous student deaths every year. According to the data from the district administration, 58 students committed suicide in Kota between 2013 and 2017.

More and more millenials are starting to believe that they have no choice but to take their lives. It could be a result of many factors, it could be because of the fear of failing in examinations, or after disappointing results (which we can see from the numbers above), constant criticism from teachers, bullying from fellow students, family pressure and a blurry sense of a future for them. Such cases and the increasing number of student suicides that there must be some changes that the education system must undergo to take the pressure off a lot of students.

According to Pradip Kumar Saha, Director of Institute of Psychiatry, Kolkata, said, “Fear of failure is a leading cause for suicide among students. When students pass through an unsuccessful phase, everything seems pessimistic to them. They feel their future is bleak and this may result in committing suicide.” One major issue with the education in India is that it has failed to provide decent job opportunities for students, who are working hard, especially to get themselves out of certain socio-economic situations.

Moreover, schools and colleges should have well trained psychologists specialised in the behaviour of students to help them and the education in classes that seeking help isn’t a bad thing. Students must understand that talking to a counselor or psychologist will not make them crazy or away from the normal, it will only make them human. More and more students should be taught in schools to break the taboo of certain pre-confined notions of seeking help from professionals, and to be accepting and empathetic towards their peers who are struggling. Teachers should be trained to identify students who they believe are suffering from anxiety or are over burdening themselves with work due to the stress of having a bright future, and refer them to the school/college counsellor.

Those in distress or having suicidal tendencies should seek help and counselling by calling one of the following numbers:

One thought on “Student Suicides Continue to Rise; 28 Recorded Everyday”