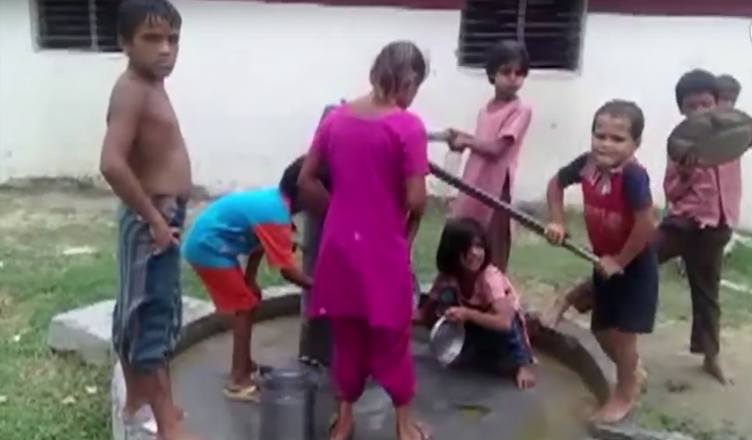 The students of a government school in Uttar Pradesh’s Sambhal district are made to wash their utensils which are used for serving them mid-day meals.

Many government schools across Uttar Pradesh lack basic infrastructure also, and now on top of that, the students are being made to wash their utensils.

A basic education officer, when asked why the students were made to wash utensils, he replied, “An inquiry has been ordered.”

Earlier also, complaint with regard to the same was made but to no avail.

The condition of government schools across the country looks sad, especially looking at the government’s mid-day meal scheme.

In a July 12 news report, thirty girls were reported to have fallen sick after consuming the mid-day meal at a Delhi government school in Narela after lizard was found in it.

“There was a lizard in the kadi pakoda we had for mid-day meal today. I also ate the same meal and had to take medicine. I have informed the Directorate of Education through WhatsApp today, but an official report will be submitted tomorrow,” The Indian Express quoted school’s vice-principal Carmela Kujur as saying.

In another such incident, as many as 125 students of Jawahar Navodaya Vidyalaya at Barahiya in Lakhisarai district, around 135 km east of state capital Patna, Bihar were found ill on July 13.

After having dinner at the hostel on the school premises, the children started vomiting and complained of nausea in the wee hours of Friday.

While 80 students were taken to the Barahiya Referral Hospital, 45 were shifted to Lakhisarai Sadar Hospital.

Lakhisarai District Magistrate (DM) Sobhendra Kumar Choudhary paid a visit to the school premises and also ordered the school to be closed for three days.

It is not only careless but also criminal. The government should ensure that the meal providers fulfil their responsibilities with due diligence and a proper check should be made once the food is prepared.

Such incidents only reflect the poor attention paid by state governments and the Centre on education and meals provided in schools.