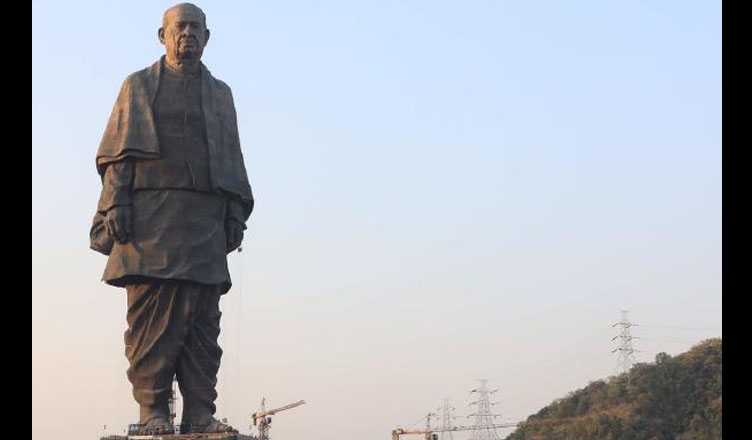 As was reported last week, thousands of tribal villagers are expected to protest the inauguration of world’s tallest statue of Sardar Vallabhai Patel, Statue of Unity. Prime Minister Narendra Modi is all set to unveil the statue today.

Thousands of police personnel have been deployed around the site of the 182-metre tall statue.

“More than 5,000 police personnel have been deployed at various points in the 10km radius of the statue site. Police patrolling has been intensified in the wake of protests by the local tribal community and leaders. Drones and helicopters will be keeping watch on the entire area,” The Guradian quoted the Narmada district police inspector general, Abhay Chudasama as saying.

The officials speculate that the tribal groups could hold protest demanding compensation for land taken from them to built the statue.

According to PTI, the heads of 22 villages situated near the dam and statue site, wrote an open letter to PM  Modi and expressed their displeasure. They said they would not welcome him at the inauguration of the statue.

Destruction of natural resources was also cited as a reason by local tribal leaders for boycotting the function.

“These forests, rivers, waterfalls, land and agriculture supported us for generations. We survived on them. But, everything is being destroyed now and celebrations are also planned. Don’t you think it’s akin to celebrating someone’s death? We feel so. We all villagers want to tell you with extreme grief that we will not welcome you on October 31. Even if you come here like an unwanted guest, you are not welcome here,” the open letter written by sarpanchas of 22 villages stated.

During the last few days, it was seen that posters of PM Modi and Gujarat Chief Minister were torn down and their faces were blackened.

The structure has been constructed on an island near Sardar Sarovar Dam on the Narmada River in Gujarat.

According to news agency IANS, the local tribe organisations had claimed that the Statue of Unity project has adversely affected nearly 75,000 tribals.

The tribals have alleged that their land was taken away for the Sardar Sarovar Narmada Project, which is near the statue site.

Last week, it was reported that thousands of tribal villagers in 72 villages affected by the project will hold a protest by not cooking food.

“No food will be cooked in 72 villages affected by the entire project, as we will be mourning on that day, for the project is being carried out for our destruction,” IANS had quoted Dr. Praful Vasava, a tribal leader, as saying.