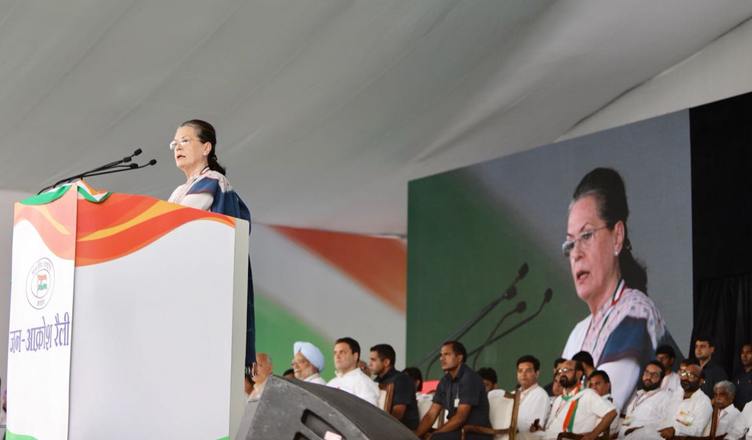 Sonia Gandhi opined that everyone is suffering under the present regime and asserted that the voice of the people will bring about a change in the country. “I am confident that the anger you have voiced here today has reached every corner of India,” she said. “The Modi Govt has left no stone unturned in destroying our democratic institutions,” she added.

The UPA chairperson further expressed her sorrow over the violence and hatred prevalent in the country today. “It is saddening to see that our society is suffering from unprecedented violence and hatred today. People from every section of society are suffering. The nation is going through turbulent times under PM Modi,” she said. “Modi ji had said ‘na khaunga na khane dunga’ but corruption has increased. The country has been dominated by dishonesty and injustice. Whoever raises voice has to bear the brunt of Modi Govt’s anger,” she further said.

Sonia Gandhi reiterated that Modi government failed to deliver on its promises and have only deceived the people. “All promises made by PM Modi when he came riding in to power have turned out to be hollow,” she said.

The ‘Jan Aakrosh Rally’, led by Congress president Rahul Gandhi is an attempt to express the anger of the common man due to the injustice meted out to them by the present government. Congress workers from across the country have gathered at Delhi’s Ramlila Maidan to extend their support to this good cause.