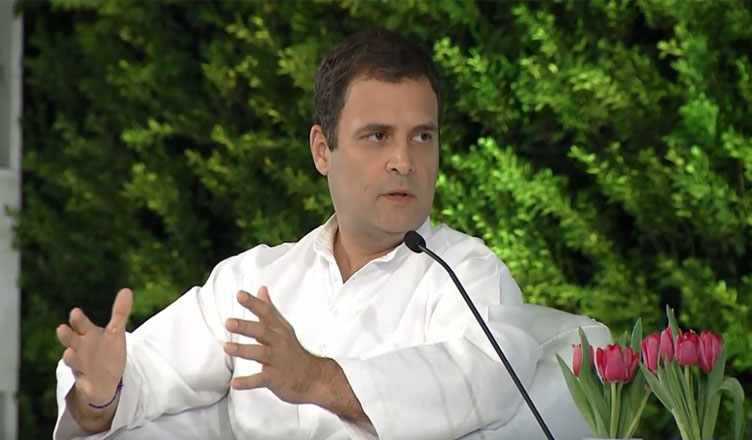 Hitting out at the Bharatiya Janata Party (BJP) for trying to propagate a single ideology while rejecting the others, Congress President Rahul Gandhi on Friday said that a single, suffocating ideology has been imposed upon the 1.3 billion people of the country.

On being asked to respond to BJP’s allegations that he was embracing soft Hindutva to appease the majority community, the Congress Chief said he has been going to temples since childhood and has nothing to do with appeasement politics.

“I have been going to temples, gurdwaras, mosques for years. Suddenly it has become publicised–I guess BJP doesn’t like it. It infuriates them,” he said.

Exhibiting confidence over securing more seats in the 2019 Lok Sabha elections, Gandhi said if voted to power, “I will strengthen the small and medium enterprise, I will make farmers feel they are important and I will build a low cost-high quality medical and education infrastructure.”

Showing a contrast between the Congress and the BJP, the Congress Chief said that they must re-imagine that India where the mind is without fear whereas reimagining India for the BJP, RSS is to shut the imaginations of 1.3 billion Indians.

The Gandhi scion also targeted the government over its biggest blunder of demonetisation and as well as its failed foreign policy.

Taking the sheen off the government, Gandhi talked about the dismal state of the economy and the farmers, the youth, the traders are all dissatisfied with the government.

“The Prime Minister must answer as to why the unemployment is at a 20-year high,” he said.

He stressed on the fact that anger of people has to be defused by beginning a conversation and listening to people.

“I am trying to listen more. That is my leadership evolution,” he said while emphasising that even Prime Minister Narendra Modi should start listening to people as it solves half of the problem already… you will have to start the conversation. You will have to defuse the anger that is taking place,” he said.