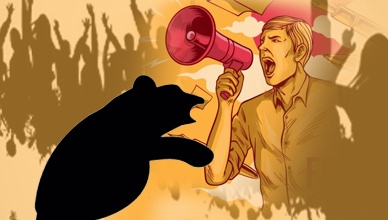 India is the largest representative democracy of the world. The liberal stalwarts of our country took immense pain to create a political system based on parliamentary democracy.

Such a democracy can function only when the elections are free and fair, and stand as effective instruments of ascertaining public will. But, today, we see our democracy under an attack. We are today, witnessing the NDA Government’s tendency to rig and manipulate the long legacy of democracy.

The periodic elections actually provide citizens right to judge both central and state governments. This right can be derived from certain constitutional provisions. Article 83(2) provides for a term of five years for the House of People (Lok Sabha), from the date of its first sitting, unless dissolved earlier. Similar provisions under Article 172 (1) provides for a five-year tenure for state Legislative Assemblies from the date of its first sitting. It is also the prerogative of the assembly to decide when to call an election. But by cutting at the root of democracy, impairing political rights of citizens and distorting the federal principles in Centre-State relations, the authoritarian Modi administration proposed a totally extraneous step to hold simultaneous elections to Parliament and state assemblies.

When the country is already burning due to issues such as unemployment, farmer crisis, GDP slump, rampant corruption, etc., such an impractical and unworkable idea like simultaneous elections can lead to a situation where the necessary balance in Indian democracy, given the diversity of the country, is lost.

The agenda behind the proposal seems attractive. Save cost. Give leaders time to perform. But the fact is that staggered elections act as a continuous check on the central and state governments. Any move to a simultaneous election seeks to rob citizens of the power to use the power of the ballot to stop an authoritarian ruler.

The push for simultaneous polls to sync both state and Lok Sabha reflects BJP’s fears of electoral defeat in the upcoming elections. This move could also help the poorly performed BJP ruling states to hide their policy failures to overcome the election hurdles. Most importantly, simultaneous elections at central and state level would hamper policy-making process at both levels which cause policy paralysis.