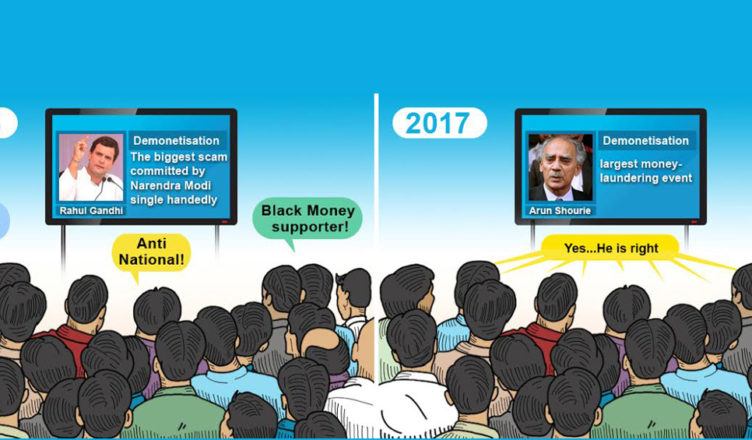 Soon after the demonetisation was announced, Congress vice-president termed it as the “the biggest scam ever.” Almost a year later, BJP’s own people are opining the same.

First, former union minister Yashwant Sinha termed demonetisation as an “unmitigated disaster” and now another former minister and BJP minister Arun Shourie has slammed the move by billing it as “the largest money laundering scheme.” Quoting from official RBI data, Mr. Shourie pointed out that the government has failed to anticipate the economic distress that has been caused by doing away with 85% of the currency.

However, these people have RBI data at their disposal which strongly supports their argument. But, it was the Congress which could foresee demonetisation’s disastrous consequences and warned about it at the very onset. You would remember, how Rahul Gandhi and former prime minister Dr. Manmohan Singh repeatedly called out the Demonetisation move as a scam that would cripple the economy.

Shourie also hit out at the shoddy implementation of the GST. “Small and medium enterprises, the transport sector, the entire agricultural sector has been hit worst, both by demonetization and the complex implementation of GST,” he said.

This is nothing different from the point that the Congress has been making in various public rallies across the country.

Rahul Gandhi had also had hit out at the top-heavy nature of the Modi administration with minimum or no power for local administration to exercise any sort of authority. As a response from the BJP, he faced personal backlash.

After similar attacks were made on BJP’s Yashwant Sinha for his critique of Arun Jaitley, Mr. Shourie said that “This is a standard operating procedure of the Modi leadership to bury anyone who challenges their governance under an avalanche of abuses”.

At present, investment is in dormancy, banking sector NPAs have grown worse, the Indirect taxes are level. There is tremendous rural distress in soft sectors like healthcare and education and perhaps most worryingly, unemployment is at an 8-year high.

It’s time the Modi government snapped out of its event management mode and did some real work to salvage what’s left of the economy.