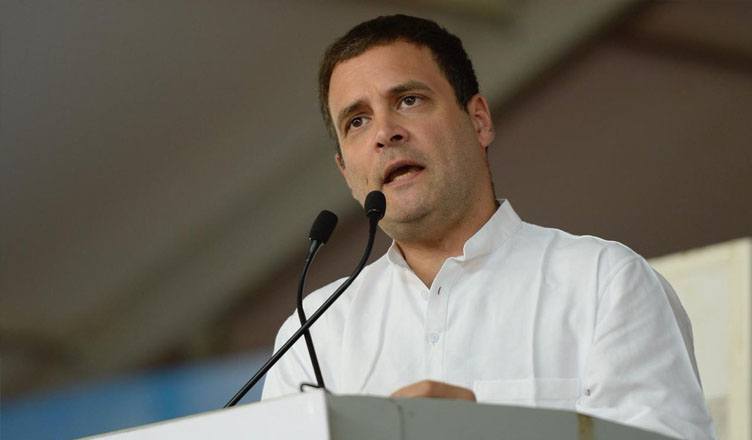 “Sachin Tendulkar was called run-making machine and Shivraj ji is a ghoshna making machine. He starts making announcement as soon as he comes on ground. He has made 21,000 announcements till date,” Rahul Gandhi said while addressing party workers in Bhopal.

Raising the issue of Vyapam scam, Gandhi said if the Congress comes to power in the state, it won’t let the culprits of Vyapam and E-tendering scam run away like Vijay Mallya.

“In Madhya Pradesh, with Vyapam scam, BJP completely destroyed the education system. When Congress comes to power, we will not let the culprits of Vyapam and E-tendering scam run away like Vijay Mallya,” he said.

Hitting out at Prime Minister Narendra Modi over the recent statement of absconding liquor baron Vijay Mallya, Gandhi said, “PM Modi said he doesn’t want to be Prime Minister, but ‘Chowkidar’ of this country’. A few days ago, Mallya revealed that he met and informed Finance Minister Arun Jaitley before fleeing to London. Jaitley too has accepted this: Mallya fled away with ₹9,000Cr. Despite knowing this, Finance Minister did not bother to inform either CBI or ED.”

The Gandhi scion termed Demonetisation and GST as the means to fill the pockets of 15 capitalists at the cost of farmers, youth, small traders etc.

“The only objective of demonetisation was to convert black money of PM Modi’s crony capitalist friends to white. Then came Gabbar Singh Tax. He gave money to 15-20 capitalists. When we will come to power in 2019, Gabbar Singh Tax will be removed and real GST would be implemented,” he said.

The Congress Chief further said that PM Modi failed to answer his questions on the Rafale deal.

“We are on the ground of HAL. Narendra Modi himself snatched the contract of Rafale from HAL and handed over the contract to his friend Anil Ambani. When the PM went to Paris, Anil Ambani was a part of his delegation. He has a debt of Rs. 45,000 crore. He has never made any jet in his life. But there is friendship between the PM and Ambani. Neither did he ask Parrikar nor the Cabinet Committee, but just straightaway gave it to Ambani. When I asked these questions to Modi in the Parliament, he had no answer. He kept looking here and there but could not answer me while looking into my eyes. This is your money which the chowkidaar stole from you,” he said.

The Gandhi scion asserted that for Congress, its priority would be the people of Madhya Pradesh. He also applauded the party workers for their effort and hard work.

Earlier in the day, the Congress President arrived in Bhopal to kickstart the poll campaign.

A roadshow was held Lalghati Square, close to the Raja Bhoj Airport in Bhopal and passed through old city areas, including Royal Market and Peer Gate, before concluding the show at BHEL Dussehra Maidan.

Gandhi took to Twitter to intimate about the same:

A sea of enthusiastic supporters greeted the Congress President Congress Sankalp Yatra made its way through Bhopal.

Congress President @RahulGandhi is greeted by a throng of supporters during the #CongressSankalpYatra in Bhopal. pic.twitter.com/CjNyQFZhSw

Rahul Gandhi will be visiting Andhra Pradesh on Tuesday and will address a grand public meeting in Rayalaseema district’s Kurnool.